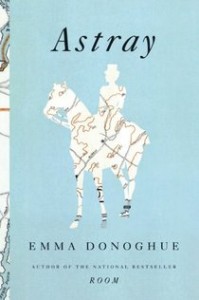 In the afterword of her new collection of short stories Astray, Emma Donoghue examines the title concept in theory and what it means for human stories. In each of the fourteen tales presented in this book, the characters are facing a physical or emotional straying of some sort, and Donoghue masterfully portrays each snippet of time through gripping and intense storytelling.

History and fictionalization meet in this collection, as the stories all have basis in real-life events, though the level of dramatization may differ from story to story. From a Puritan village in 1600s Cape Cod to a Revolutionary War encampment, from mid-1800s London to turn of the 20th century New York City, the settings vary, but the characters all share common feelings of displacement, or longing for a completeness that they imagine elsewhere.

Donoghue provides snapshots of these characters’ lives, creating in a small number of pages, emotion and detail heavy narratives. Each character has a distinct and appropriate voice for his or her time period, with vernacular and cultural references immediately placing the story in time. Some selections are more difficult to read than others, admittedly, though they all tackle complex subjects such as slavery, prostitution, sexual mores, and the demonstration of power.

In The Hunt, the story of a fictional young German soldier forced into service and shipped over to defend British sovereignty during the Revolutionary War is heartbreaking and terrifying. At the cusp of adolescence, this child is dropped into an unknown world against his will, and all he can think about is his warm bed and loving mother back at home. Set during a documented time in 1776 when “British and German troops in New Jersey and Staten Island started systematically attacking the female population,” this story examines the horror from the perspective of a distraught boy who has no choice but to obey his commander or face his own death.

Though not all the stories in Astray are as blatantly haunting, they do all touch upon aspects of humanity that inspire reflection. Days after reading this collection, I continue to have visions of these characters at random times during the day, imagining them as representatives for times in history that are often unimaginable to my contemporary world brain. For its intensity and brilliant writing, I am happy to give Astray a 5 Star Reads designation, and I look forward to reading about others’ perspectives on this moving collection of short stories.

We’re happy to offer a giveaway of two copies of this gripping book. Just leave a comment to be entered, U.S. and Canada mailing addresses only, please. We’ll announce our winners here on November 21. This giveaway is now closed.

Here are this week’s winners:

« The Thankful Book
The Reader »