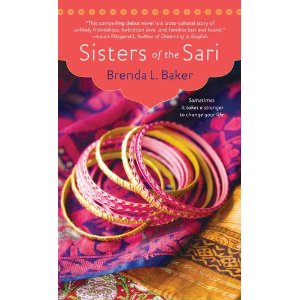 Sisters of the Sari

opens with Karia Langdon standing in front of a luggage carousel in Chennai, southern India, being informed that her luggage has been sent to China. The next day she boldly sets out to buy herself some new clothes, only to end up lost, robbed and covered in excrement from an unfortunate slip. A tiny, desperately poor woman named Santoshi helps her get back to her hotel. When Kiria goes to the hostel where Santoshi lives to repay her the bus fare, she is shocked by her living conditions, yet impressed with the women’s tenacity. As she continues her tour of India, the things she saw in Chennai stay with her, haunt her.

Kiria’s views are spot-on and funny. When the desk clerk tells her a cab ride should be 70 rupees, she says, “This was just pure sadism. The price may have been 70 rupees for a cute young Indian desk clerk in a tight pink sari, but the going rate for an old tourist in a gamy sweatsuit was 200 rupees.” (p. 2) I read that part aloud to my husband. Anyone who has traveled, much less lived, in a developing country can attest to the truth of this, but calling it sadism had me howling with laughter.

The story of Santoshi, sold as a child to a beggar, now subsisting on a meager cleaning job and 2-rupee tips that she squirrels away in jars hidden all over the city, is told without sentimentality. Santoshi emerges as a person with a mind of her own. Her story sparks in Kiria the idea to help poor women by opening a hostel where they could live affordably and independently. The cast of supporting characters includes Mary Elizabeth, an Anglo-Indian social worker, and her lawyer-friend Raj. In the meantime, Kiria hires Santoshi as a maid and rents an upstairs apartment from a traditional Indian family, who play out a drama of the clash between ancient and modern before her curious ears. The family has bought a rich daughter-in-law, a well-educated woman now stuck doing laundry by hand and bearing the brunt of her overbearing mother-in-law’s discontent and her husband’s spendthrift ways.

Different chapters are told from different points of view, but my favorite hands-down were those told first-person in Kiria’s voice. She is funny, grumpy but warm, and no nonsense. In some ways she is an atypical heroine—in her 60s, a corporate executive, overweight and traveling in sweats. Her voice was so genuine that I felt like I knew her in real life and that we were good friends.

Sisters of the Sari

deals with modern India and all its contradictions, from the continuing problems of dowries, child-beggars and the idea that women can’t be independent, to internet connections, AC installations and Pizza Hut delivery.

Stories of westerners moving to developing countries to do good aren’t unusual, but this one stands out. All the voices are believable, and the depiction of India is neither too glowing nor too bleak. It’s hard to find that balance, to write a book about a real place and capture it in all its ambiguities, to capture people from all walks of life and represent them accurately on paper. Sisters of the Sari succeeds on many levels. I loved this book.

I’m really pleased to announce that one of you can win your very own copy of Sisters of the Sari. To enter, leave a comment below. The giveaway will end on June 29. The giveaway is closed.

Elizabeth has wanted to go India for years and years. She loves curry and makes it often for her family, who have mostly given up complaining about it. Read about her other travel and culinary adventures at her blog Planet Nomad.

« S’Mother
5 Conversations You Must Have with Your Son »