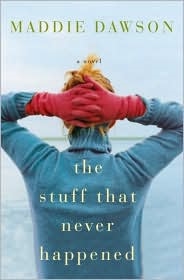 What a wonderful, humorous, thoughtful and entertaining read. It was perfectly timed too, since I had recently read/listened to the most acclaimed literary fiction novel of the decade, and had just finished a pretty dark and thought-provoking debut novel.

The Stuff That Never Happened by Maddie Dawson drew me in from the beginning. I loved the character’s voice, which was authentic and introspective yet really funny at the same time.

The story alternates between the late 70’s and the present, when Annabelle and Grant McKay are trying to come to terms with being empty nesters. He’s wrapped up in his work, and she’s feeling neglected and left without a purpose. The flashback portions take us to the late 70’s — all feminism and free love. Annabelle is in college, and her parents are going through their own marital difficulties. She’s drawn to the bad boy, but super-nice guy Grant touches a part of her and fills her need for stability.

The story is told in a masterful way, revealing only certain parts of the whole story, so that when other facts come to light, the reader is surprised (or at least this reader was). This is not your typical story. As I neared the end of the novel, I was surprised at the turns — not once but twice.

It’s told in first person, with a confessional tone. I like first person, but this one particularly worked for me because Annabelle is a reliable narrator who also benefits from years of perspective, which keeps it from feeling too self-absorbed (and did I mention that she’s funny?!).

Though I’m not an empty-nester, I am a mom and a wife, and I related so much to the twists and turns that marriage takes and the choice that we make when we pledge to stay together “for better or for worse.” This novel actually looks at several marriages in a couple of generations. You will find yourself or your parents in one of them (I wrote about one connection I made over at my blog today).

This was the first book I’ve read by Maddie Dawson, but it won’t be the last. I give it 5 Stars because I thoroughly enjoyed it, and while it’s fairly typical women’s fiction, it surprised and entertained me all the way through.

Jennifer Donovan loves to peek into the lives of others, whether via memoir or realistic fiction, to benefit from their good choices and bad decisions. Peek into her life at Snapshot.