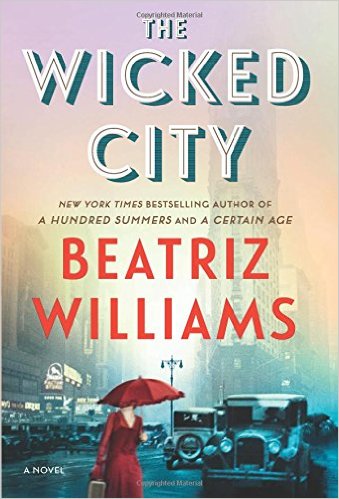 The Wicked City opens in the present day (ish). Ella is in that “just hit bottom” phase of her life, having just discovered her husband’s infidelity. She moved out of their posh apartment into a small Greenwich Village apartment. She wants to just lay low, but when she runs into some of the residents in the laundry room, she begins to realize that it’s not that kind of building.

Then we meet Ginger, 1920’s New York, involved in a bust on an illegal speakeasy.

The stories go back and forth, and eventually we see how they intersect. This took a bit too long, but it was obvious from the beginning that the building was what connected them. There’s a big of a supernatural element in this story, but I almost just read it as literary license, and it added flavor to the story.

I think that Ginger’s story is the crux of the story, with Ella’s there to draw in those who might not want to read straight 1920’s fiction. I found myself more invested in Ella’s story, but both were fully developed. Ginger’s story — both her present life and the background information that helped me understand how she became who she was — was interesting, but for some reason I didn’t care about it as much.

If you liked Beatriz Williams’ A Certain Age, you’ll love The Wicked City. I have enjoyed other novels more, but I think it’s because I read these relatively quickly together, and they seemed similar, although The Wicked City has a lot less of that “confidential tone” that I felt got in the way. The other thing I enjoyed about this book more is that there is that inclusion of a present-day story set in that same “Wicked City.”