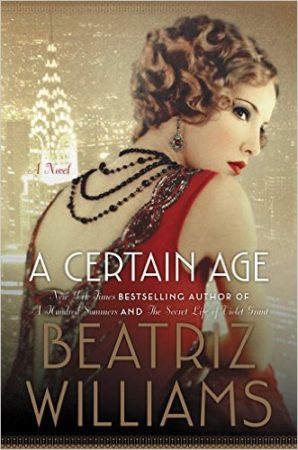 A Certain Age is the second novel I’ve read by Beatriz Williams. Tiny Little Thing blew me away, so I was interested in this novel set in the society world, but several decades later, in 1920s New York City.

The story focuses on Mrs. Theresa Marshall. She has grown children and a husband who discretely keeps a woman and child in the city. She’s always kept busy, but at a party one night, a young World War I officer catches her eye, and she is unfaithful for the first time. She could never imagine divorcing, even though Octavio would like to marry her and start a family, despite their almost-twenty-year age difference. But there are complications, such as the young ingenue who Theresa’s confirmed bachelor brother is courting, and Theresa’s husband’s urge to finally make things right.

It is clear that Theresa likes having the best of both worlds — her “Boyo,” as she calls him — at her beck and call, and the perks and respectability that come with being Mrs. Theresa Marshall.

Occasionally a confessional tone slips into the novel when it comes from Theresa’s point of view as the narrative contains phrases like “indulge me for a moment,” or as she’s looking at the portrait of a younger self and reflects that:

…she will face an important decision, the most vital choice of her life, and one on which all her future happiness depends.

Did she make the right one?

The novel had quite a few twists and turns, some which I saw coming, and others which surprised me. I liked being surprised. I did not enjoy this one as much as Tiny Little Thing, but it is definitely a richly drawn capsule of a certain age. The suspense about what is going to happen to each of the characters builds throughout the novel, as well as a murder mystery for added intrigue.

The author’s note at the end said that the novel is based on Richard Strauss’s Der Rossenkavalier opera.

« In Twenty Years
The Sweetheart Deal »