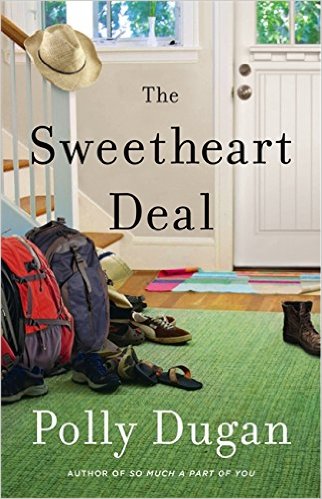 Leo and Garrett have been best friends since they were 14. Garrett became a professor; Leo a firefighter. Leo married, settled down, had 3 boys, while Garrett can’t seem to ever get serious with any one woman. Although they live on opposite sides of the country, Garrett in Boston and Leo in Portland, Oregon, they stay close, visit occasionally. Garrett gets on well with Audrey too, Leo’s wife. One drunken New Year’s Eve, Leo asks Garrett if he’ll agree to marry Audrey if Leo dies. Garrett scoffs–Leo’s not going to die. But Leo insists, even making Garrett sign a piece of paper to that effect, which he later mails to Garrett, who tucks it into a pair of socks.

Years later, Leo does die. Ironically, it’s a skiing accident, not a work incident. Garrett decides to move to Portland; he flies out to help Audrey and the 3 boys, bringing with him that fateful bit of paper. He moves into the guest room, gets to work finishing the addition to the house that Leo had started. As Audrey moves through days and months of intense grief, she and Garrett gradually become closer and closer.

Meanwhile her boys are going through their own pain. Garrett is there to help to a certain extent, like when the youngest starts acting out. By going early to the boys’ school and playing basketball with him and his friends, Garrett helps diffuse the situation. The oldest boy, Christopher, is now a teenager and has a crush on his friend’s mother. He is very wary of Garrett muscling into his father’s place, as he sees it.

The Sweetheart Deal does a good job of presenting a family’s grief; from Audrey’s crushing sorrow to the boys’ mix of guilt and feeling lost, to Garrett’s mourning a life-long friendship, to the fire station honoring one of their own. The romance between Audrey and Garrett will come as no surprise to anyone. But Audrey doesn’t know about that piece of paper in which Garrett promised to marry her. As the addition nears completion and the two adults begin sharing a bed more often, it’s clear that a denouement is brewing. How will she respond when she finds out? Will her newfound feelings for Garrett be enough to overcome her feelings of being an unwilling partner to a scheme between men? Will Christopher’s proprietary feelings make themselves known? An unusual look at a second chance for romance.

Check out Jennifer’s review of the book from when it was published in hardcover.

« A Certain Age
The Satisfaction of a Binge Read »