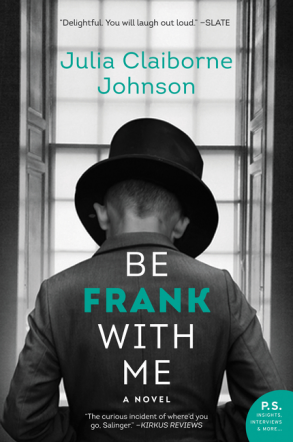 M.M. Banning (not her real name) wrote a best-selling book at 19, a Great American Novel, that won all the prizes and sold millions of copies and has been required reading for 8th-graders across America ever since, and then she disappeared, to Bel-Air, as it turns out, where rabid fans still occasionally find her and try to break down the wall surrounding her property. Now, years later, she’s lost her money through bad investments and she agrees reluctantly to write another novel, and still more reluctantly to put up with an assistant sent by her New York publisher, who is also one of her few friends. She has a few stipulations: No Ivy-Leaguers or English majors. Must drive, cook, tidy. Computer whiz. Good with kids. Quiet, discreet, sane.

Alice Whitley, in her early 20s and originally from Nebraska, has no idea what to expect when she arrives in LA. She’s confronted immediately with the existence of Frank, Mimi’s 9 year old son, a precocious and highly unusual child with an  encyclopedic knowledge of classic movies and a wardrobe to match. In the real world, Frank would have diagnosis after diagnosis, an IEP, and more, but in the novel he’s blissfully left to his own devices, although he has a psychiatrist and has moved schools several times. And unsurprisingly–Frank’s predilection for dressing like a mini E.F. Hutton, or showing up in top hat and tails or in full African safari costume does make him stand out on the playground–like a peacock in a barnyard of chickens, thinks Alice.

Frank is a wonder. Author Julia Claiborne Johnson has managed to get him pitch perfect. He swings between annoying, heartbreakingly sweet, frighteningly obtuse, and always in his own world. Above all, he feels real. Too often when writers try to create quirky characters, they become caricatures. But Frank is someone I think I’d recognize on the street–and not just by his distinctive wardrobe.

Meanwhile, Alice is facing her own challenges. Mimi is rude and secretive, Frank takes a lot of special care, and then there’s Xander, Frank’s “itinerant male role model,” a gorgeous man who shows up occasionally, stays a while, then infuriatingly disappears again. Everyone in this novel has lots of issues, mostly from their family of origin. There are suicidal brothers, guilt-ridden brothers, absent fathers, distant mothers, and more. Alice is learning how to handle Frank, how to handle his school, how to handle various emergencies, and more, but she’s really still a young woman herself and mistakes are made. What makes the novel keep moving is its warmth and heart though. You can tell when an author loves her characters, even the difficult ones.

Be Frank with Me is a great read, filled with original characters drawn with wit and humor and love.

Want to see someone else’s opinion? Click here to see our reviewer Dawn’s take on the hardback version.