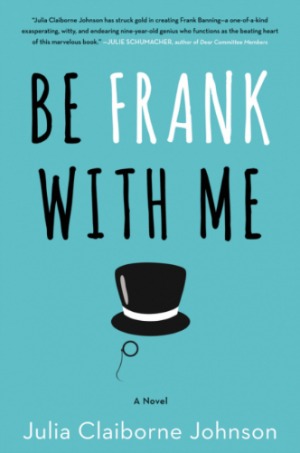 There is no shortage of quirky child characters in literature, but oftentimes those depictions lean toward the sugary-sweet, isn’t-he-adorable side. In Julia Claiborne Johnson’s Be Frank With Me, the debut novelist balances the sweet with the sour in her depiction of young Frank, a boy who in most other settings would be wearing a label to explain his behaviors, anxieties, and impulses. Instead, Frank is simply presented as Frank, and the protagonist Alice must learn how to live in his world.

Alice has been hired as an assistant of sorts to the author M.M. (Mimi) Banning, a fictional version of the way some might have imagined Harper Lee. After writing a novel at a young age, Mimi disappeared from the public eye. At the novel’s opening, she is on the verge of losing everything she owns due to a Bernie Madoff-like scam, and she is convinced by her longtime publisher friend to pen a new novel, a virtual guarantee at recouping her losses.

But Mimi only lurks at the edges of this story, even though her presence is often felt, most often ominously by Alice, and wistfully by Frank. It is Frank, however, who is the star of this narrative. Frank, Mimi’s nine-year-old son who doesn’t seem to fit any of the typical expectations at the mention of a nine-year-old boy.

Frank enjoys dressing in morning suits, top hats, fez hats, monocles, cufflinks, and would rather die than have to wear something so primitive as a t-shirt. Alice’s main task in ‘assisting’ Mimi is to keep Frank occupied for the months that it takes for the novel to be completed. Alice arrives in the summer, and while that requires her to spend entire days with Frank, which is challenging as she slowly learns the ins and outs of what is acceptable to Frank, the biggest challenges lay ahead of her when it is time for Frank to return to school. Because of his various executive functioning challenges, Frank has difficulty with socialization, reading and interpreting others’ emotions, and functioning in an environment in which he is not in full control. Add to that a remarkable genius intelligence and a penchant for sharing the countless facts on all sorts of subjects at any time, and the result is a very difficult experience in a public school environment.

How Alice and Frank come to develop a relationship is a testament to both their strengths and skills with perseverance, and it is touching to watch blossom. Frank is a richly developed character who is lovable and terse, considerate and selfish, with his own way of perceiving the world around him, and Alice is a young adult who both questions her own previous notions about herself and gains confidence as she learns from Frank’s perspective. I adored this story for its characters and its earnest storytelling, and I love that the title uses a well-known phrase that can actually be interpreted literally by readers. In this smashing debut, readers are invited to be Frank for a little while and look at the world through his eyes.