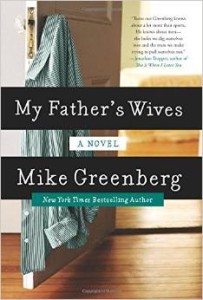 When I read All You Could Ask For by Mike Greenberg, I did so on a whim, as a fellow NU alum who loves sports. The book blew me away. I was shocked by how well a male author – let alone a male sports co-host – could create and relate to three very different female characters. I eagerly picked up his latest book My Father’s Wives, anticipating more of the same.

Oddly, with a male protagonist, it was far less relateable than his previous effort. That isn’t to say that it wasn’t an enjoyable book or that I didn’t connect with Jonathan Sweetwater on some level, but it wasn’t blow me away good this time around.

At 40 years old, Jonathan Sweetwater is an uber successful executive who is indispensable to his billionaire boss thanks to his pickup basketball skills. His life is full of glitz and glamour from the private car that shuttles him around to the private jet and first class while traveling to the boys club type dinners he enjoys. His life is perfect, and he knows it. He is married to the love of his life and has two adorable children, the proverbial boy and girl to make the proverbial perfect family.

And yet his maturity is not what I would expect of someone who has achieved so much in life. When he arrives home from a trip and stops at his house to change before picking up his kids from school to treat them, he hears unmistakable sounds coming from the guest bedroom. When he peers through the keyhole and sees evidence of an affair, he hightails it out of the house, numbed.

He avoid confronting his wife about it, fearful of shattering his bliss and being forced to make a decision of whether he stays or goes once he knows that yes, his wife is cheating on him. Instead, he hires a private detective and asks advice from his mom (something that I find unspeakably adorable, especially as he shows up with chocolate croissants and lattes).

When his mom suggests that he needs to figure things out for himself, Jonathan decides that this is all tied to his father abandoning him and his mother at his ninth birthday party. Since his father has unfortunately passed away, Jonathan can’t learn anything directly from the father he had no relationship with. Instead, he visits the powerful senator’s wives. Five of them, in fact, only one of whom he’d ever met before (because, of course, the senator’s second wife was his former secretary).

I expected this to turn into a journey of self-discovery and self-awareness, but much of that was missing from the book – although I think it may be intentionally so. The book follows the 12 days he spends tracking down and meeting with his father’s wives before finally deciding what to do with his own life. That isn’t a huge time for mind-blowing self-discovery, and it includes plenty of time “working” – as much as his working resembles that of any executive I’ve ever met or worked with.

I didn’t dislike this book. I didn’t dislike the message I received by the end of the book. There were plenty of characters I adored, interestingly, most of them were females in the book. Anne, who is now a yogi in Nevis. Johanna who runs a flowershop in London for Percy Sweetwater’s fifth wife. They were simply snippets, however, and not the main focus. I walked away from My Father’s Wives not disliking the book but feeling somewhat unfulfilled. And perhaps, that’s fitting.

Written by Michelle of Honest & Truly! who turned her back on the high powered corporate world years ago and has only a few regrets, including her lack of status when flying on airlines these days. See how she fills her life now via her blog Honest & Truly! and follow along with her on Twitter where she is also @HonestAndTruly.