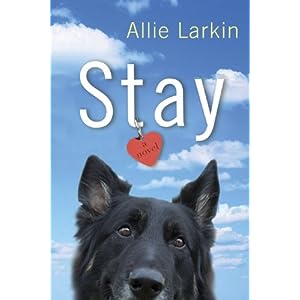 Imagine, if you will. You just watched your best friend marry the guy you’ve been in love with for 7 years. Her mother has paid you off to stay away from him, and you’re missing your own deceased mother something fierce. You have had a few too many vodkas with Kool-Aid and are sucked into a Rin Tin Tin marathon. You think, “A dog would love me. A dog wouldn’t judge me. I need a dog.” What do you do? Go online and order a German Shepherd puppy, of course! And that’s just what Van (short for Savannah) Leone does in the new novel Stay, by Allie Larkin. Only when said puppy arrives, it’s a 6 month old behemoth who responds to commands in Slovakian, including “search the house. ”   Yikes! Van, who has never owned a dog, names the puppy Joe, and is immediately smitten by Joe’s new vet, Alex. But when Janie and Pete return from their honeymoon, Van must reconcile her feelings for the guy she’s been in love with while juggling the new guy with the floppy blond hair.

I really enjoyed this book, and not just because I love dogs. Anyone who’s had a dog can relate to Van as she tries to figure out how his doggy brain works, but he just wants to be loved and Van finds herself doing just that. But you don’t have to be a dog lover to enjoy this book, as Van turns from learning to control Joe to dealing with her mother’s death 3 years earlier and how Pete really feels about her.

Stay is very well written, though I would have liked to see some of the minor characters fleshed out a little more, though that can be difficult with a first-person storyteller. Van does learn some things about Pete, Janie and Janie’s mother, and she also learns that love comes in many different forms, especially where you least expect it.

I found myself doing something I can usually resist – flipping a few pages ahead to find out what happens. The story really moves along and I kept picking it back up after putting it down.

I will warn interested readers that there is quite a bit of drinking, as that’s how Van deals with her troubles, and some foul language, and one very mild sex scene that barely registers, but I thought I should mention it if you don’t care to read that kind of thing.

Nancy has an overgrown ball of fur of her own, though the dog doesn’t respond to Slovakian and her vet is a woman. She blogs about her 2 boys and life in Colorado at Life With My Boys.

« Mailbox Monday — August 30
Classics Bookclub — How are you doing? »