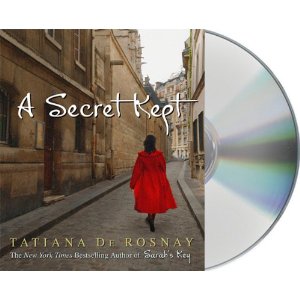 I never got around to reading Tatiana de Rosnay’s first novel, Sarah’s Key, so I grabbed at the opportunity to read her second novel, A Secret Kept (or actually to hear it on audiobook). I started listening to it the day after I received it, and the way the story unfolded kept me interested and looking for any excuse to squeeze in a few minutes of listening (great motivation to get some housework done!).

Antoine Rey is a divorced father of two trying to get over his ex-wife, navigating ennui with his job as an architect and the struggles of parenting teenagers (ACK!). I found him to be slightly wimpy, but as the story progresses, I come to realize that he’s not really wimpy, just tired and disappointed with life.

A Secret Kept begins in the hospital. Antoine’s sister Melanie has been taken to the hospital after getting in an accident while driving home from a special trip they took together to celebrate Melanie’s 40th birthday.

They visited Noirmourtier, the place they vacationed as children until the death of their mother. While they are there, they talk about their past and present lives. It is here that memories are dredged up about their mother and her death.

The single-woman-turning-40 angle is another theme that has great contemporary interest, and I don’t know when I’ve read a book that portrayed the functional relationship between a brother and sister so well.

I have a feeling that this story is quite different from her first novel. It is slightly dark, dealing with family secrets and personal disappointments, but it is very contemporary. The issues addressed will be familiar to anyone, in any industrialized country, even though it takes place in France.

Notes on the Audiobook: The male narrator Simon Vance (who I just noticed also narrates the audio versions of Stieg Larsson’s wildly popular books) does a great job telling this story in a voice that I think suits and describes Antoine well, slightly mousey, yet in a way that garners sympathy or empathy. He also voices the females quite well.

This is a fairly slow-moving story, in spite of all the secrets and surprises that are unfurled, and while the slow pace of such a character-driven novel sometimes is frustrating as I am reading, I love to listen to these types of stories on audiobook (See my review of Home: A Novel by Marianne Robinson for another example of this).

Since I am not French, nor can I pronounce or read French, I enjoyed the European (British?)-accented narrator’s ability to rattle off French names and places that I would have skimmed over if I was reading it. It helped the story maintain its sense of place for me.

The book/audio book doesn’t release until September 14, but we have a copy to give away to one of you, as well as a bonus audiobook of Tatiana de Rosnay’s first novel, Sarah’s Key.

Leave a comment if you’d like to win (U.S. residents only). One of you will receive both audiobooks. We’ll announce the winner on September 15. The giveaway is closed.

These giveaways closed last week, and the winners are

Jennifer Donovan is such a fan of audiobooks. If you aren’t, why not? Read more of her strong opinions at her blog Snapshot.