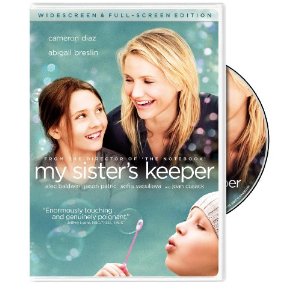 I enjoy Jodi Picoult’s novels. Yes, she’s a blockbuster bestselling artist, which doesn’t always mean quality, but I think that there’s a depth and lyricism in her novels that some people (Ahem, fellow contributor) might assume would be lacking in someone who churns out a novel a year.

Actually, since I don’t just read many random novels for pleasure (choosing instead to see what I discover as it is offered to me by publishers and authors), my favorite way to experience Jodi Picoult is via audiobook. I’ve probably read two or three of her novels, and listened to at least that many on audiobook. Recorded books does an excellent job with her novels, employing a different actor for each of the characters that is used as a chapter narrator.

Last year I listened to (and loved) My Sister’s Keeper. I loved the story of a family dynamic complicated by a chronically sick child, I loved the mysteriously enigmatic supporting characters (most notably Julia and Campbell), and the suspenseful dramatic tension, and the lack of absolutes (most of those things are true about most of her novels).

When the movie came out, I wanted to see it, but life got in the way. However, I recently watched My Sister’s Keeper on DVD.

People who read the book complained about the ending of the movie. It was different (and I think that the book’s is better), but it’s a fine ending. The way the story is told on screen is very similar to the way that the book read (or in my case, “sounded”). There is a feel of the voices of the different characters as narrators.

Again in the interest of time, much of Campbell’s storyline that I loved was cut, but still Alec Baldwin was well-cast. The character of Julia is completely lost, and mother Sara’s sister’s role is pumped up (obviously to give her a female foil). The very interesting subplot involving the brother Jesse is also missing from the movie.

Cameron Diaz plays mother Sara well. I had never seen her as a mom, and wasn’t sure if it would work, but it did. She was that mama-bear watching out for her bear cub that is the driving force of all of her decisions.

Bottom Line: If you enjoyed the book, and can give the movie a little leeway, you might enjoy it. If you just want to see the story played out and you haven’t read the book, I think it’s still an enjoyable family drama. But honestly — read the book (or better yet — try out the audio version. My library carries many of Picoult’s books on the Playaway, preloaded MP3 player). Whether you’ve read Picoult or not, this is a book that I can recommend.

Jennifer Donovan enjoys a story of any kind, especially when it involves character drama, whether on the page or on the big or small screen. She blogs at Snapshot.