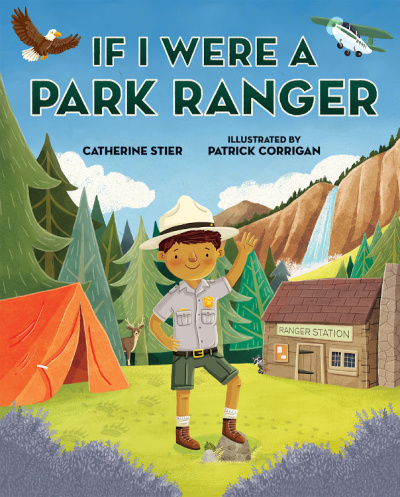 In the United States, there are over 400 national park sites within the National Park System, and a new picture book showcases the importance of the work done by the dedicated rangers to keep these areas maintained and preserved. Catherine Stier’s If I Were a Park Ranger, with illustrations by Patrick Corrigan, gives a fun peek into the myriad of responsibilities held by park rangers and even encourages kids about how to pursue such a career!

Starting off, several key figures in the history of the NPS are highlighted, including the founding directors, Stephen Mather and Horace Albright, and financier John D. Rockefeller Jr., along with Captain Charles Young, the first African American superintendent of a national park and Gerard Baker, a Native American superintendent who helped preserve native heritage in the parks. From there, many aspects of the work of park rangers are explored, with a focus on the diversity of the parks as a group. While some parks exist within areas of natural wonders such as mountains, caves, or seashores, others are at historic battlefield sites or presidential childhood homes. Just as the sites vary, so do the responsibilities of their stewards. Whether focused on public safety, natural preservation, education, research, or more, park rangers all provide an invaluable public service.

As these parts of the job are described, different NPS sites are featured in the illustrations from the most famous, such as Grand Canyon National Park in AZ and Mount Rushmore National Memorial in SD, to others that may be less known. The illustrations are bright and cheery featuring a group of happy children as uniformed park rangers. This book is a lovely introduction of the value of our National Park System for young readers, and it may spark enthusiasm and appreciation of natural resources. Be sure to check out the Author’s Note in the end for extended information about the research, education, and art initiatives that are integral in the NPS, as well as the suggestions for kids interested in becoming a park ranger when they get older.

We’re smack dab in the middle of National Parks Week (April 20-28) right now, and in celebration of the week and this fantastic picture book, you can enter to win this fun prize pack:

Ten lucky winners will receive a copy of If I Were A Park Ranger by Catherine Stier. One Grand Prize winner will receive a signed copy of the book PLUS a Park Ranger Stuffed Doll, a “National Park Geek” Iron-on Patch, National Park Animal Cookies, Camping Stickers, Woodland Animal Mini Notebook, and Book Cover Postcards! Winners will be selected at random and notified via email. One entry per person, please. US addresses only. Entries are due by 5/3/19. Follow this link to enter!
#NationalParkWeek / #FindYour Park / #EncuentraTuParque
« The Map of Salt and Stars
Asma’s Indian Kitchen »