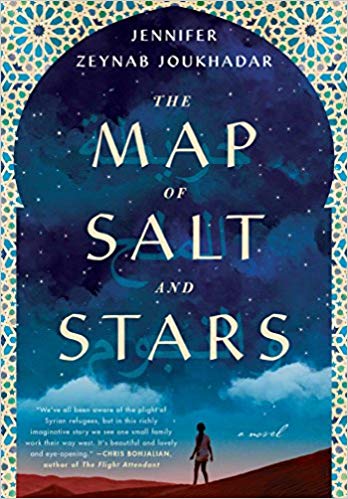 Nour is a Syrian-American girl, born in New York as the youngest of 3 daughters in a Syrian family. When her beloved father dies of cancer, her grief-stricken mother decides to move her family back to Syria, a place where language and culture  are familiar to all except 12 year old Nour. 18-year-old Huda, the oldest, is happy with the move, but 17-year-old Zahra is unhappy to have lost her senior year with friends. The mother begins to again practice her ancient art of mapmaking, painting her maps in oils and acrylics and leaving them to dry in the sun. Nour struggles to retain as much of her father as she can, whispering the stories he told her to the roots of the fig tree in the garden.

Unfortunately, this move takes place in the summer of 2011, and the family has moved to the city of Homs. By that fall, the city is under bombardment. Their house sustains a nearly direct hit, leaving them wounded amidst rubble out of which they can salvage little more than one map and a pair of broken pumps for their mother to wear. They flee with their close family friend Abu Sayeed in his car, taking Huda and her shrapnel-filled arm first to a hospital in Damascus. From Damascus, they decide to leave Syria and head to Morocco, where their uncle lives. They meet up with Umm Yusef and her family along the way, but there are many forces that will work together to endanger and even separate this desperate crew.

Their path follows that taken by the mythical Rawiya, a girl whose story Nour’s baba told her time and again and which was her favorite. Rawiya lived with her widowed mother near the Moroccan/Spanish town of Ceuta, a city located along the Moroccan coastline but owned by Spain to this day. Hearing news of the famed mapmaker Al-Idrisi, on a journey to map the known world, she disguises herself as a boy named Rami and travels to Fez to join him as an apprentice. Soon she is sailing the Mediterranean, learning to wield a scimitar, and using her incredible rock-slinging skills, learned from her father, to take down the mythical roc, an enormous white bird that can speak and seek revenge. The novel moves back and forth between Nour’s story and Rawiya’s adventures.

The Map of Salt and Stars is a lush, gorgeously-written book. It gives tongue to enduring sorrow and loss, but keeps one looking up at the stars. It’s a nearly perfect book–my only complaint is that the timing of things at the end seems a bit off, but I don’t want to spoil it for you so you’ll have to see for yourself if you agree with me. Highly recommended.

« Nothing Is Forgotten
If I Were a Park Ranger, with Giveaway! »