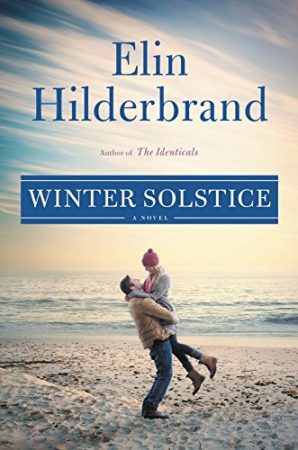 The Winter Street series was supposed to be a trilogy (read my reviews of Winter Street and Winter Stroll, and Winter Storms), so when I saw Winter Solstice in the NetGalley offerings, I didn’t even wait for the audio to be offered to us, as I have in the past. Author Elin Hilderbrand explains in the Acknowledgements that when her editor asked her to write a fourth Winter Street book, she realized she could “write a ‘double sequel’ and include some of the characters from The Rumor and weave their stories together.” It just so happens that The Rumor is the only non-Winter Street book I’ve read by Hilderbrand. Serendipity!

Winter Solstice covers the last 3 months of the year following the events of Winter Storms, focusing on Halloween, Thanksgiving, and of course, Christmas. Life isn’t perfect for the Quinn clan, but they put their differences aside to be with Kelley for the holidays as he succumbs to cancer.

Bart has been home from Afghanistan for 10 months, but hasn’t adjusted well to life after captivity. When he meets Allegra Pancik at the birthday party Mitzi insisted on throwing for him, he wonders if he really can find happiness. Ava is loving her life in New York City, but when her boyfriend’s son comes to visit, she wonders if he’s the man she thought he was. Jennifer has kicked her pill habit and has to turn down a well paying interior decorating job when the client turns out to be a creep. Could all of her problems be solved by an offer from her old dealer? Margaret and Mitzi both also have big decisions to make concerning their futures, and poor Kelley doesn’t have much time left.

It’s been interesting to me how different books in the series focus on different characters — it’s not only the main Quinn family members whose stories are told. I didn’t love Ava’s storyline this time, and I find the characters unnecessarily keep way too many secrets from each other, or spend too much time making assumptions instead of actually communicating. I also would have liked to have heard more from Kevin and Isabelle’s point of view but they were sidelined for Eddie Pancik, who is trying to resurrect his real estate career after his stint in prison and lucks into a cold call from Powerball winners who want to buy on Nantucket. Eddie’s storyline brings in some comic relief from the somber overtones of Kelley’s looming death, so I did not mind it so much.

Those minor quibbles aside, I loved this follow-up to the trilogy and devoured it in a few sittings. Although I admit I shed a few tears at the end, it was satisfying to know that everything is going to be ok for the Quinns. I definitely recommend reading the first three books first, I don’t know that The Rumor is required as enough details are included that someone who hasn’t read it wouldn’t be lost.