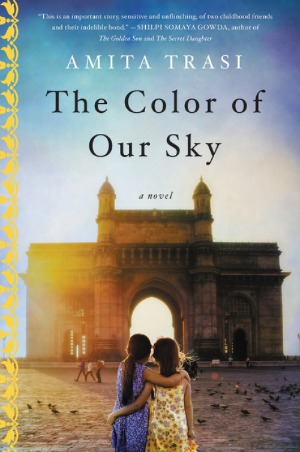 Friendship and tragedy converge in Amita Trasi’s novel The Color of Our Sky, newly released in paperback. Jennifer reviewed this novel when it was first published in 2015, and like her, I was impressed by the author’s storytelling and rich narrative.

Two characters are at the center of their own alternating story lines, in both present-day and through flashbacks. Tara was eight-years-old when her father took in ten-year-old Mukta, who was born into a cult of temple prostitutes, in an attempt to save her from the fate of her grandmother and mother, and generations before them. Moving her out of the rural area of India and into the city, he hoped to provide her with a different type of life, even though complete equality with his own daughter would never be possible within India’s caste system. Tara and Mukta formed a friendship early, for children can overlook cultural expectations quite easily, but the tragic death of Tara’s mother in the 1993 Bombay bombings brings a change to the family. After Mukta is kidnapped from their home one night and presumed dead, Tara’s already grieving father completely turns into himself.

Though Tara and her father moved to America following their family losses, Tara finds herself drawn back to India after her father commits suicide eleven years later. Among his things, she finds evidence that he had been paying a private investigator for years to continue the search for Mukta. Tara returns to her home country to continue his efforts, partly fueled by the guilt she’s held onto for the years since Mukta disappeared. What follows is an intimate and devastating look into the world of sex trafficking, alongside the suspenseful quest to find Mukta.

It was painful to read about the horrors that some characters witness and experience, though incredibly, there is never the complete loss of hope. Trasi treats this topic with sensitivity and nuance, giving each protagonist a solid narrative voice filled with emotion.

We’re happy to be participating in the TLC Book Tour for The Color of Our Sky.