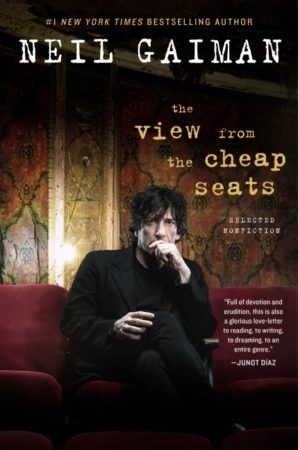 The View from the Cheap Seats by Neil Gaiman is a non-fiction collection of speeches, essays and introductions written over the course of his post-journalist career as a writer. Each tidbit includes the date it was written and where the publication or speech first appeared.

In the introduction Gaiman says “you are under no obligation to read them all, or to read them in any particular order,” and I took that direction to heart, skipping book introductions where I’ve never heard of the author or essays that didn’t hold my interest. But I greatly enjoyed those I did read in the entirety, which was most of them, especially when they involved authors or artists whose work I admire, or when they discuss his own work in progress, such as a working title or how an idea evolved.

The book is organized by sections and topics covered include genre, winning awards, his life-long fascination with fantasy and sci-fi, comics, music, and much more. There’s a bit of repetition as certain anecdotes are included in different works, but this just serves to reinforces his beliefs and opinions.

Gaiman is entertaining, honest, thoughtful and self-deprecating, and it’s clear that even 30 years into his career as a writer he’s a little surprised at his own success. He writes to please himself, ensuring the finished product contains material he himself would want to read. The glimpse into how his mind works is fascinating.

It was a little over a year ago that I stood in line for over 5 hours to meet Neil Gaiman and have him sign the books I brought with me, including Trigger Warning, the collection of short stories released during that book tour. Also available are my reviews of The Ocean at the End of the Lane and Stardust, and most recently, Elizabeth’s first-time read of one of my favorites, Neverwhere.

« All Summer Long
The Girls in the Garden »