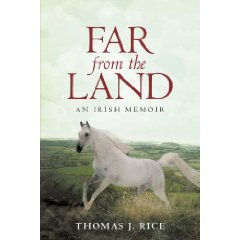 If you ever have a yearning to read Irish literature, the month of March should kick it into high drive. I’ve been a bit ensconced in it, between reading this hefty book along with my discovery of An Irish Country Girl last month.

My brother-in-law is a confirmed Irishman (a 100% American Irishman). He’s visited the country each summer for weeks on end for the last several years. He speaks Irish (bet most of you didn’t even know Irish was a language, did you?). So I’ve seen pictures and know of his love for the country (as well as my in-laws who have visited more than once themselves). So with a surname such as Donovan, I’ve gotta dip into the history of this country a bit, right?

Far from the Land is Thomas Rice’s story (actually it goes back a bit further into his mother’s life as an immigrant from Ireland to the US in the 20’s — and then back again). He was raised on a rocky farm in Ballinvalley, the only boy in his large family, and since his father was mostly absent, he ended up running the farm as a young teen, and eventually chose to leave Ireland for England and then America.

It’s told with gentle foreshadowing as he has the benefit of looking back over his life, knowing how each event ends up fitting into the puzzle of his life.

At times, it reads almost like a family history, and it could do with some editing, but if you are interested in life in Ireland in the 1940’s and 1950’s, specifically the life of a poor farmer and young man coming of age, this book will definitely captivate you. Rice’s writing is descriptive, and the use of local terms and expressions always adds to the telling and the local flavor (sometimes when too much of this is included it becomes quite confusing, but that is not the case here).

There’s a great mix of historical fact and personal experience, so if you are interested in the history of Ireland, there’s plenty of that too — the oppression, the poverty, and the general character of the people there. I was fascinated by some of the facts, such as the huge population decline during the Potato Famine, and the treatment of the Irish immigrants by the British during this time. In fact, the conflict between the freed slaves, the working-class Americans, and the Irish immigrants is a central plot point to A Wish After Midnight, which brings up another audience suited for this book — those who are interested in reading about oppressed people.

Jennifer Donovan is proud to be a wee bit Irish and is thinking green this month. Read more about her life and family at her blog Snapshot.