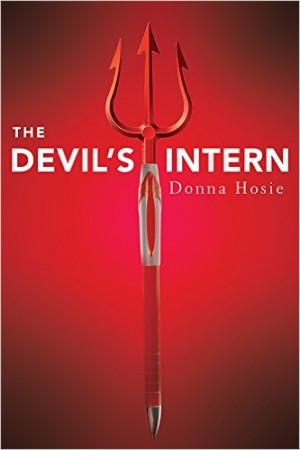 Often, we think about the afterlife and what it will be like for us when he head to the Pearly Gates. Unfortunately, seventeen year old Mitchell Johnson ended up in Hell where he’s now a lackey in the accounting department in The Devil’s Intern by Donna Hosie. He can’t remember how or why he was hit by a bus, but he’s obsessed with somehow stopping his death so that he can go on to live the life he “deserves” to have, fame and fortune as a rock musician with plenty of tattoos.

He gets his chance when he discovers that his boss Septimus is in possession of the Viciseomater, which can control time, he schemes to “borrow” it and use it to prevent his death. He plans to take only his best friend Alfarin, a Viking prince from the tenth century, but his other two best friends – both girls – get wind of his plan and come along for the ride.

They plan to visit each of their deaths in turn, and Mitchell imagines how they will each undo their death – since all died far too young and tragically – to be able to live a long and full life. Of course, nothing goes quite the way he plans it. Though he’s able to easily control the Viciseomater to go where and when he chooses, his friends have other plans.

Alfarin, though only fourteen when he died, is wise beyond his years and simply wants to witness his own death and see that his family finds his body after the battle is over and sends him off with a proper goodbye. Mitchell doesn’t understand how he can stand there and not stop what Alfarin knows is coming, but of all of them, he is the most typically immature teenager of the group.

With the death of Elinor in the Great Fire of London, again things don’t go the way Mitchell plans, but Elinor is happy though Mitchell can’t understand it. Even with the death of Melissa (known as Medusa due to her hair) in the 1960s, Mitchell’s only goal is to stop it. Medusa has never been able to talk about her death or what brought it about, and she takes her time dealing with the circumstances, only slowly revealing them to her best friends, before they finally head to the scene of her death.

The book is a fun young adult novel with characters who don’t swear or do inappropriate things I’d feel uncomfortable with my teen reading. The topics of death and some of the deaths themselves are somewhat graphic, but not purely for the sake of being graphic. Hosie has done a great job of weaving humor throughout the book, which makes it easier and more fun to read, as well.

Nothing in life is simple, and Hosie takes that to heart in her novel. The characters are complex with different motivations as they grow and connect throughout the novel. There are other forces at play, both as Septimus appears to have an ulterior motive with letting Mitchell steal the Viciseomater and some vicious beasts following the four friends through their time travel trying to capture someone.

The book was fun and an easy read. It wasn’t too simplistic that a teen wouldn’t want to read it, nor was it so deep that it becomes a chore to read. With both male and female characters and just a hint of romance, this is a great book for those who aren’t rabid readers, as well.

Written by Michelle of Honest & Truly! who can only hope she isn’t destined for toilet cleaning duty in Hell when she finally breathes her last. See how she’s working to make her mark in this world via her blog Honest & Truly! and follow along with her (mis)adventures on Twitter and Instagram where she is also @HonestAndTruly.