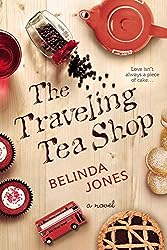 The Traveling Tea Shop is an enchanting tale of four women, from four different generations, as they board a bright red London bus outfitted as a traveling tea shop to take a cake-themed tour of New England.

Doesn’t that sound lovely? I know I thought so, and eagerly accepted the publisher’s offer of a review copy of this new novel by Belinda Jones.

The story begins with Laurie, co-founder of a travel planning website, preparing for a meeting with her idol Pamela Lambert-Leigh, a well-known baker from Laurie’s home, England. When Laurie knocks Pamela’s socks off with the best cheesecake in New York City, she easily lands the job of scouting locations and finding the best desserts in New England for Pamela’s tour, arranged by her publisher to help her break into the US market.

Laurie’s a bit thrown when Pamela is accompanied by her mother, Gracie, who’s going to drive the bus, and her daughter, Ravenna, who’s as spoiled as she is surly and clearly only along for the shopping, and finds herself in the middle of their family drama.

From the mansions of Newport, RI to Cape Cod to the von Trapp family home in Vermont, Pamela and her entourage seek out American dessert favorites and provide a British treat in return. The dessert descriptions had me salivating, and the descriptions of the beautiful New England coastline had me missing the ocean, bringing back memories of Maine family vacations and a weekend in Provincetown during my college days.

Pamela’s family is a bit frustrating, as families usually are — Gracie’s meddling, Ravenna’s attempts at sabotage and even Pamela’s refusal to take her head out of the sand regarding all of it all rang quite true. But during the course of their trip Laurie’s influence works wonders on Ravenna and she learns to appreciate the family she has.

I quite enjoyed The Traveling Tea Shop and recommend it to anyone who enjoys a fun romp with travel and tea.

« Teaching Will: What Shakespeare and 10 Kids Gave Me That Hollywood Couldn’t
Toad Weather »