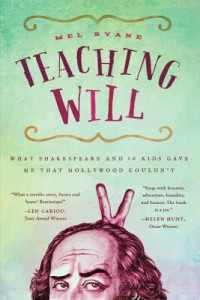 After a career as a working actress on stage and screen, Mel Ryane struggled knowing how and where to continue applying her gifts. She moved on to coaching actors, entered the Directing Workshop for Women at the American Film Institute, and wrote an industry award-winning screenplay.

But then what? That’s what Ryane was asking herself as she approached the Principal of Arden Street Elementary – a lower income, under-served public school in Los Angeles – about starting an after-school Shakespeare Club for 3rd, 4th, and 5th graders.

With no teaching background, Ryane jumped into The Shakespeare Club armed only with a script, some fresh journals and pencils, and a lot of hopeful enthusiasm. What she got in return was a school year full of struggle, heartache, triumph, and memories to last a lifetime.

Teaching Will: What Shakespeare and 10 Kids Gave Me That Hollywood Couldn’t chronicles Ryane’s first year with the Club, and introduces the reader to a handful of children with various life challenges. They come from broken homes and rough streets, are sometimes unruly and hurtful to each other. Ryane is in over her head from the beginning, but she never goes for the cheap shots in her re-telling. There is no melodrama, just raw emotion, and you feel from the start how badly she wants this Club to succeed – not just for herself, but for the kids.

Though The Shakespeare Club is the centerpiece of this memoir, Ryane weaves in elements from her own past that echo her new experiences with these kids, and gives the reader a bit of insight through journal excerpts from Club members, and even quotes from Shakespeare’s various works. I was impressed with how seamlessly Ryane tied all of these elements together to create a very textured book.

I was also impressed with the honesty and vulnerability of Teaching Will. Even when Ryane writes that she wants to strangle the kids during a particularly rough class period, you can’t fault her. She presents the situation as it is, warts and all, without comment or self-judgement. It endeared me to her right away. And much of this book is just plain funny. Ryane’s writing is wonderful, and I would love to see Teaching Will as a movie one day.

As you read how these students – and Ryane herself – grow through their shared experience in The Shakespeare Club – you can’t help but root for them all. I was so eager to see how each new rehearsal would go, and I wish I had been there for the final performance (though with Ryane’s re-telling, I almost felt I was). I cried at the end and wanted to hug each of those children, and give Ryane a great big high-five.

Mel Ryane ran The Shakespeare Club for six years, and now tours the country speaking to students and educators and running workshops on how others can begin a Shakespeare Club at their school. This is a compulsively enjoyable book, and one I highly recommend.

« Join 5 Minutes for Books on Pinterest
The Traveling Tea Shop »