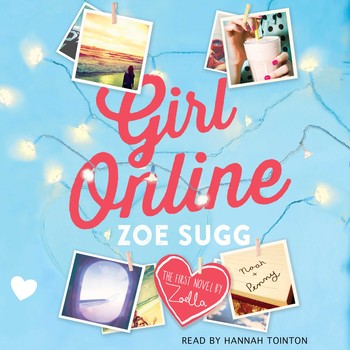 I love awkwardly lovable teen characters (such as those featured in the YA novels of Maureen Johnson, see related links below), and Penny, the heroine of this novel is that. Girl Online is subtitled “The First Novel by Zoella.” I am not familiar with the You Tube vlogger Zoe Sugg, but the book didn’t need star hook to pique my interest. Penny’s honesty and humility drew me in from page one. Whenever she gets in a situation with a boy she likes, she inevitably says the wrong thing. Worse than that, a tumble she takes at school showing her underpants ends up broadcast on YouTube for all to see.

Three things save her from focusing completely on her humiliation. One is her anonymous blog where she is known as GirlOnline. She shares her struggles, her humiliations and insecurities. This is her goal:

I have this dream that, secretly, all teenage girls feel exactly like me. And maybe one day, when we realize that we all feel the same, we can all stop pretending we’re something we’re not. That would be awesome. But until that day, I’m going to keep it real on this blog and keep it unreal in “real” life.

The other thing that provides is an immediate respite is a trip to New York City. Her mother is a wedding coordinator. When a wealthy couple from New York City comes into her London shop with a last-minute request for a no-holds barred Downton-themed wedding at the Waldorf Astoria, the entire family takes an all-expenses paid trip to New York for Christmas.

The third thing that helps Penny keep her head on straight is her best friend Elliot. They have the kind of relationship teens long for. Their bedrooms share a wall of their building, so they tap secret codes and respond to any emergency (whether it’s real or imagined). Elliot doesn’t feel that he can be honest with his family about his sexuality or anything that is important to him, so he spends a lot of time with Penny and her supportive parents.

He’s invited along on the trip, which is absolutely perfect, until Penny meets a boy. The grandson of the cook at the hotel is perfect. She can tell him anything — something she only ever felt about Elliot — but because she’s busy helping her mom with the wedding and Elliot is out sight-seeing with her Dad, they don’t have time to talk, and Elliot has to read about her encounters with “Brooklyn Boy” on her blog.

That’s the first — but not the last — of Penny’s difficulties in the midst of this dreamy week.

I loved so much about this book. It was funny and sweet and magical with just the right amount of teen angst and drama, but it’s not completely lightweight chick lit for teens. Like so much wonderful YA lit does, it also touches on issues that are so real to many teenagers today such as cyber-bullying, anxiety and panic attacks. I especially loved this element, as so many teens suffer from mental illness and it is not often represented in an honest, healthy way in novels. The conflict with his parents that

This is the kind of YA book I can recommend without reservation. It’s a solid teen read, featuring a chaste romance between an almost-16 year old girl and an 18-year old boy. There was no drinking or drugs or other unsavory (not to mention illegal) teen activity. I don’t think there was any swearing. If there was, it was mild and infrequent.

Hannah Tointon read the book. Her British accent accentuated the sense of place, and her sweet delivery contributed to Penny’s likability. There were also interesting sound effect like a buzz for a text coming in and clacking of the keyboard as Penny wrote her blogs.

Listen to a sample of the Girl Online audiobook at the Simon & Schuster site.

« Before He Finds Her
The Last Good Paradise »