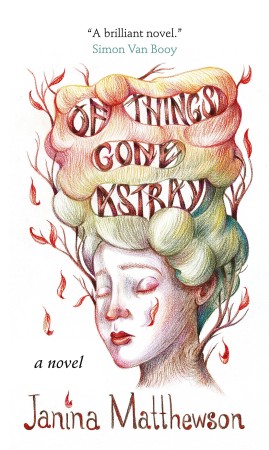 Piano keys. The front wall of a house. A lover. A sense of direction. These are among the things lost by the characters in Janina Matthewson’s new literary fantasy novel, Of Things Gone Astray, where the literal is taken to the extreme.

Some of the losses have reasons, if not explanations, that become clearer as the novel goes on, or are alluded to early on. But in each case, the characters find something they didn’t know they were missing as they adjust to their losses.

One boy, Jake, who relives the untimely death of his mother, begins finding things that belonged to others, scavenging lost and founds and frequenting a pawn shop, only buying the items that were found. But like the others, Jake is losing something important and needs help finding his way back to it.

I’m being intentionally vague because I don’t want to give away too much about the characters. The story unfolds as the characters work to deal with their losses, and they also cross paths on occasion, not knowing what the others are going through.

What I also liked was how the people in each person’s life is affected by their loss, usually in a good way. Their family members and loved ones learn to get along without the thing that was lost and their relationships are improved.

Readers who like their literary fiction mixed in with some fantasy will enjoy this novel. It’s probably not something I would have picked up if not for the review pitch, and I’m glad I did.

TLC Tours provided me with a copy of this book, and also shared a behind the scenes piece and an excerpt from the novel. Of Things Gone Astray is also a Feb 2015 Indie Next Pick.

« The Girl on the Train
The Phantom Music Box »