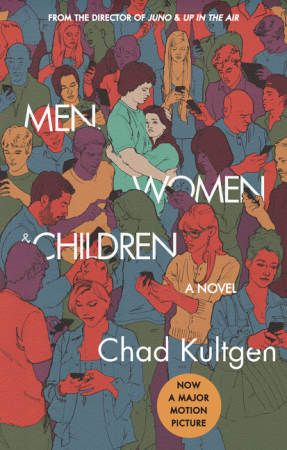 The first thing I noticed when I saw the trailer for the movie Men, Women & Children earlier in the fall was the casting of Ansel Elgort in one of the main roles. My teenage son noticed the same thing, and as we had only recently re-watched The Fault in Our Stars on DVD, we were both intrigued. The trailer made me think that the film might be another movie to view with my son, especially as it focused, at least in part, on relationships among teenagers. What I didn’t realize at that point was that the film was an adaptation of Chad Kultgen’s 2011 book of the same name- Men, Women & Children.

While I didn’t get to see the film when it had a limited run in our area some weeks back, I am looking forward to seeing it when it comes out on DVD next month. Interestingly enough, I was made even more interested in the film after reading the book this week… and maybe not for the reasons one might think.

I can’t say that I enjoyed reading this book, even though I would rate it quite highly. Honestly, I found the novel highly disturbing and troubling to read, but that’s because the subject matter addressed here was highly personal and so explicitly detailed. While the details were most definitely disturbing, the overall conclusions that can be made about the characters’ relationships– and by extension, the relationships we may be involved in ourselves, as well– were the scariest of all. This novel explores serious and interwoven themes such as sexuality, sexual relationships, self-image, and communication among the adults and young teenagers who serve as the large cast of characters, and Kultgen does not hold back in the least.

The story is told through a detached narrator, a voice that displays no emotion, no judgment, but simply lays out each scene in quite explicit detail, including sexual encounters of varying degrees of consent, with some encounters between people in relationships and others with little or no emotional attachment at all. The narrator format, especially in its detachment, for me at least, served to heighten the disturbing factor, in that no voice of reason spoke to the sadness and destructiveness of so many behaviors chosen by the characters. So why a high rating, then? The writing is gripping, the subject matter is important, and the delivery is intended to make us uncomfortable, I think. Mission accomplished.

Though I’ve concluded that it best I watch the film on DVD on my own to decide if it’s appropriate fare for my teenage son, I am quite anxious to see how the book translates to the screen. Looking at the cast listing online, I see that Emma Thompson is listed as The Narrator. I’m curious to see how that form of storytelling will look on film, and if the same level of detached and nonjudgmental tone will be achieved. I predict that the overall feeling of the film will continue to be serious, but I imagine that there will be much less of the explicit content that was detailed in the book. Hopefully, the film will be able to still convey the same intense and thought-provoking statements about what it can mean to be an adolescent interacting with the amount of technology at our fingertips, and what effects those same media can have on adult relationships.

Haven’t seen the trailer? Check it out below:

Have you read the book or seen the movie? I’d love to hear your thoughts. (And your reassurance that it’s all going to be okay as a parent of three kids!)