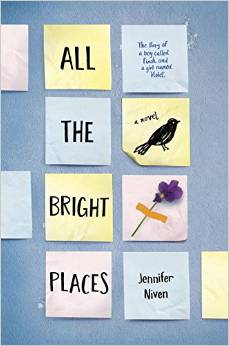 I didn’t really want to read this book, but I was curious. Two teens meet on the ledge of a bell tower and change each other’s lives. It’s being compared to The Fault in Our Stars (as is any emotionally resonant new YA fiction these days), which has been criticized for romanticizing cancer. I don’t agree with that assessment of that title, but I did worry that this novel would somehow romanticize suicidal feelings. But I decided to give it a go, and I’m glad I did.

If I didn’t want to read All the Bright Places, I definitely didn’t want to be enchanted by the sad story, but I was. Violet is a girl dealing with the tragedy of losing her sister in a car accident a year ago. Violet and Eleanor were both in the car. Eleanor died. Violet lived. That’s a lot for a 17-year-old to handle. It’s changed her, but maybe it’s changed her into the Violet she should have been in the first place, more cerebral, less concerned with popularity.

Theodore Finch is known as Freak. He’s always changing his look and his outlook. There’s rebel Finch, 80’s Finch, Prep Finch, but who is the real one? He deals with anger and depression and suicidal thoughts. Violet captivates him, and he eventually breaks through the shell she’s built up around herself.

The book captivated me. It was a little angsty, self-absorbed, as is much of YA fiction, which creates that great combination of looking back to my past and relating with the teens in my life. But it quickly got real, too real. Finch’s battles with mental illness are inexplicable and since they are mostly seen through his POV, they aren’t explained away, which is real. We don’t often get the luxury of understanding.

When I attended kidlitcon 2013, we had the conversation about needing diverse literature. It’s thankfully a conversation that has continued. Some of the stats about people who are underrepresented in children’s and YA literature stuck with me. A big one was the number of teens who are affected by mental illness (anxiety, depression) versus the very low number of characters who have this struggle in literature. If nothing else, this book gives us that accurate representation.

The author’s note at the end of the book tells us that “every 40 seconds, someone in the world dies by suicide,” and “every 40 seconds someone is left behind to cope with the loss.” Jennifer Niven shares about how she’s dealt with being a survivor of suicide and pleas with anyone who is struggling to get reach out for help and provides a list of resources.

This is a good book. It’s a hard book, but if we are truly looking to YA lit to mirror the concerns and realities of teen lives, then they will not only address first love, but bullying, labels, neglectful parents, loss, and suicide. This book has it all.

It doesn’t come out for a few more weeks, January 6, 2015, but it’s going to get a lot of buzz in the year to come. It’s already been optioned as a movie with Elle Fanning attached to it.