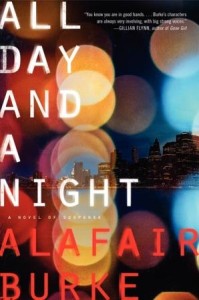 The expression “all day and a night” refers to the sentence of life (all day) without possibility of parole (the night). Anthony Amaro was convicted of killing 6 prostitutes, breaking their bones post-mortem, and burying them all in the same park. He’s been sentenced to life without the possibility of parole, and has been behind bars for over 18 years. But when psychotherapist Helen Brunswick is found murdered and with her bones broken post-mortem, Amaro claims he was wrongfully imprisoned and calls for a retrial.

Hard-charging, TV personality lawyer Linda Moreland, with her anti-police agenda, is all too eager to help bring about justice. Max Donavan, the ADA for New York, appoints his live-in lover NYPD detective Ellie Hatcher and her partner JJ Rogan as a “fresh look” team, commanded to discover the truth. Meanwhile, Linda Moreland has hired young attorney Carrie Blank as an assistant, whose older sister was one of the original 6 victims.

Carrie’s life story has ramifications on the case at hand. Born and raised in a poor area of Utica, NY, she and 2 of her friends were the bright ones, the ones with potential. Carrie got out and did well and so did Bill, the son of a local policeman. But choices made in adolescence still have power to affect their adult lives.

Meanwhile, Hatcher and Rogan have their hands full with a case they really don’t want, as they know they’ll end up investigating their fellow police who worked the original case. They head north to Utica, the town where the first 5 victims came from. The storyline moves back and forth between Ellie Hatcher and Carrie Blank. As things progress, Carrie begins to wonder whose side she’s really working for. The characters are well-drawn and believable, and suspicion moves from one person to another. Just when I thought I had it figured out, events shifted and I turned my attention to another potential villain.

This book is part of a series concerning Hatcher and Rogan, and while events in previous books are referred to, it’s not necessary to have read them to follow the action.

All Day and a Night

is well-written and gripping. I found myself caring about the various characters, even some of the less sympathetic ones. And while the author ties things up neatly at the end, she does so in a way that’s not only very satisfactory but also believable. I really enjoyed this book, and recommend it to anyone who enjoys police drama and suspense novels.

« What’s On Your Nightstand June 24
The Book of Unknown Americans, a 5-Star Read »