Read Michelle’s thoughts first, and keep reading for Jennifer’s thoughts on this novel: 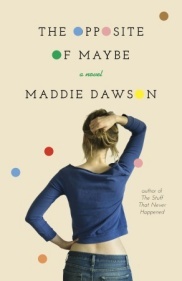 Jonathan and Rosie are the couple who have never grown up in The Opposite of Maybe by Maddie Dawson. Their best friends are all married couples who get along great, and their kids are growing up and near ready for college. In comparison, Jonathan and Rosie still have their college dorm chic furniture and working jobs that get them by without having an actual career. As sympatico as they are, there are still areas of stress in the relationship as Jonathan remains the selfish teenage boy and Rosie is starting to look more at the world around them.

Rosie no longer wants to be the butt of their friends jokes as the couple that can’t figure out how to do anything right. She has an interest in other people’s children rather than seeing them as annoyances. And more importantly, she sees the need to take responsibility for the well-being of the grandmother who raised her where Jeremy just sees that she needs to put her foot down and hire a caretaker and be done with it.

When Jeremy’s current obsession – collecting antique teacups – turns into a potential job when a backer cold calls him and asks him to move across country to open and run a teacup museum, Jeremy jumps at the chance and drags Rosie with him. She isn’t quite so sure she’s ready to abandon her life, especially before she’s comfortable with her grandmother’s situation. When Jeremy continues to act like a big kid – not hiring movers, insisting the oven doesn’t need to be cleaned, and more – Rosie has finally had enough. She stays in New England while Jeremy moves across country.

Eventually, Rosie realizes that she’s accidentally pregnant – that phone call about the museum that interrupted things was a real doozy – and she works to put her life back together. She needs to decide if she’s going to get back with Jeremy, where she wants to live, what her relationship is with the young man who’s living with her grandmother helping her out, and more.

The Opposite of Maybe is a coming of age novel for a woman who should have come of age years ago. This is a light read, even given the somewhat heavy topics of unexpected pregnancy and end of life care that are addressed in it. There are many moments of unexpected humor that make it more enjoyable, but I still felt as though Rosie were a teenager still waiting for everything to go perfectly and whining when it didn’t. The fact that she was in love with Jeremy and had a successful relationship with him made it that much harder to like her in parts of the book, but she definitely has redeeming qualities.

The main characters all have fairly messed up lives from Soapie – Rosie’s grandmother who took her in after her mother died but never wanted to be a grandmother – to Tony – the many who is helping Soapie in home and is in the midst of an ugly separation. Their secrets and issues all come out throughout the course of the book, and in some cases I simply want to shake them silly until they simply grow up and do what is so obvious needs to be done instead of hiding from the issue.

The Opposite of Maybe is a great book to pick up when you’re heading to the beach once the weather finally warms up. It isn’t deep, the characters are memorable enough that you can keep track of who’s who, and the plot and subplots aren’t overly complex. You can easily put it down and pick it back up again without losing your place or the rhythm of the book.

Written by 5 Minutes for Mom contributor Michelle who would definitely be one of the friends giggling at the “Rosie and Jonathan Show” depicted in the book. She laughs at her own life, however, on her blog Honest & Truly! and you can follow along with her on Twitter where she is also @HonestAndTruly.

Rosie is 44 and pretty settled with her life. She lives with her longtime partner, never having bothered to marry or have children. Life might feel a bit stale and routine, but it’s good.

The opening scene of The Opposite of Maybe: A Novel is full of foreshadowing. She and Jeffrey are “in media res,” when they are interrupted. Due to that there is a birth control fail, and it doesn’t take a genius to figure out what happens to Rosie’s comfortable easy life.

I was a bit turned off by the book literally starting off with a bang, but like I said, I saw the place for it. It allowed the author to show and not tell. It wasn’t even all that explicit, but just seemed odd to open the book and read that right off the bat.

I read another novel by Maddie Dawson The Stuff That Never Happened years ago and really enjoyed it, which is why I turned to this novel. I didn’t like it quite as much, but Dawson did paint enjoyable, unique, and memorable characters.