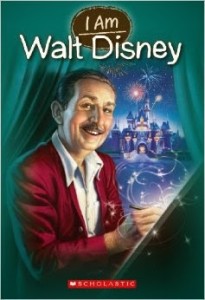 The wee ones love the magic of Walt Disney, and they are not alone. He is a fascinating character, and the city of Chicago is about to open his original home as a museum that I am certain we’ll one day visit. The “I Am…” series by Scholastic books has just published I Am Walt Disney by Grace Norwich as the latest installment, and as always, I learned a ton about him when reading it.

The book follows the format of others in the book, detailing the story of Walt Disney. I love that it doesn’t sugar-coat the effort that it took for him to achieve his life’s work and the difficulties he faced as a child. It was interesting for me to see the parallels between his father’s entrepreneurial spirit – that often failed, but never gave up – and Walt’s willingness to do what it took to find his niche and create his empire.

I knew many of the details of his life, as he’s such an icon even today. I still learned so much more, and I was fascinated to discover that the reason Walt Disney began creating full length animations was because the theaters that had been buying his animated shorts could no longer afford to purchase them as movie theater owners in the late 1930s had started running double features but not increasing their ticket prices. Walt didn’t try to change what he couldn’t but instead decided to tackle the problem head on by becoming one of those full length features, starting with Snow White and the Seven Dwarfs.

I Am Walt Disney is easy to read, with plenty of illustrations. It is aimed to appeal to third and fourth graders, and I can attest that my third and fourth graders both devoured the book, though I think the appeal is wider than that. It is at a fifth grade reading level, something I appreciate as the parent of children who read above grade level where I frequently struggle to find content that is appropriate for them with a higher reading level.

The call outs within the book to make a specific emphasis on tangents related to the current topic in Walt’s biography without being completely relevant to the immediate story. It was interesting to learn about the evolution of cartooning and how the multi-plane camera was a true innovation. I do wish that when they take up two pages, they don’t come in the middle of a sentence that instead of breaking across one page, breaks across three. I found myself skipping the callout to finish the paragraph or page then going back a page to read the callout, which isn’t convenient.

Written by Michelle who would definitely have been a member of the Mickey Mouse Club – and once signed a kindergarten homework assignment as “Mickey Mouse” in green crayon – had it been around when she was a child. See what else Michelle adores via her blog Honest & Truly! and follow along with her on Twitter where she is also @HonestAndTruly.

« Ketchup Clouds
The Golem and the Jinni, a 5-Star Read »