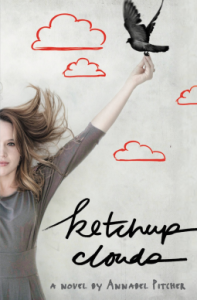 If you look at the cover you might imagine that this is a lighthearted young adult read with the requisite teen love triangle and maybe some angst. Well, there’s a love triangle, and there’s some angst, but it’s not over a botched dye job or a back-stabbing best friend. No, Zoe is writing letters to a death row inmate who is set to be put to death on May 1 for killing his wife. She introduces herself by telling him she knows how she feels, because on the previous May 1, she killed someone she loved too. Stuart Harris is paying the price for his crime, but Zoe has to deal with the fact no one knows.

The entire story is told in the form of letters she writes to him late late at night in secret, starting in August, 9 months after the event occurred. She shares information about her present life as well as going back to tell the story of what led up to the events of May 1.

The story was told in such a way that we don’t know what happened and why — and not even to whom! — until much later. It unfolds naturally. It was suspenseful but not stilted. Zoe is a great character. I wanted to know about the past and about her current life, and I loved hearing it from her perspective.

Ketchup Clouds by Annabel Pitcher is a typical YA story in some ways featuring a great teen character, but it’s told in such a unique way and with such skilled restraint, that it really stands out in my mind.

CONTENT NOTE: Young Adult fiction spans a gamut, so I like to include notes on content so that you can avoid surprises. There’s some sexual content (maybe a strong PG-13), and not much language that I remember.

« Roomies #Giveaway
I Am Walt Disney »