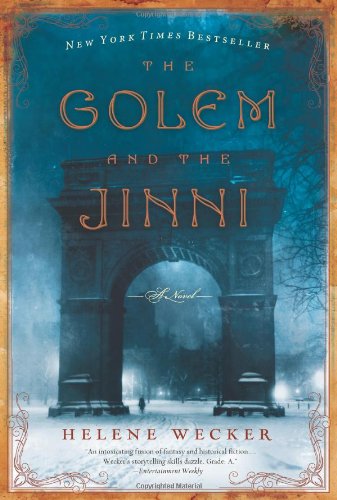 Last summer, I met a friend at the pool one day, and we chatted while our kids played in the water. Soon into our conversation, her eyes lit up as she told me about the book she was immersed in at the time. She described it as magical and insisted that I would love it as much as her. Eight months after it was first published in hardcover, it now sports the coveted “New  York Times Bestseller” phrase on the cover of its paperback release. And my friend had it completely right– The Golem and the Jinni by Helene Wecker had me riveted with its opening paragraph, and it was always painful to have to put the book down.

The title characters are introduced separately as the multilayered story begins to unfold. The Golem is a creature made out of clay and animated by an ancient mysticism linked to the Kabbalistic arts. In 1899, a Prussian Jew sought out the services of a mysterious man, rumored to be a disgraced rabbi, to create this creature over whom he could have complete control. He wished to bring his newly made wife/servant with him to America to make a fresh start with his life. Against the advice of the Golem’s creator, the man brings her to life aboard the ship during their passage shortly before he perishes, leaving her utterly alone and unsure about the world into which she has been born.

If the word Jinni sounds unfamiliar, think “genie,” and you’ll begin to get a concept of this particular character. The Jinni are an ancient type of creatures, beings of fire that originate in the Middle East. This particular Jinni has been trapped for centuries in a copper flask, and though the imagery of a genie in a lamp comes to mind, this creature is indebted to no one for any number of wishes. He is however, trapped in human form upon his release from the flask as a result of the solid, unbreakable iron cuff fastened on his arm. He remembers nothing of his entrapment, and he struggles with this new form that keeps him from his innate natures.

The combination of an historical setting, a theme of being an outsider, and the realms of ancient peoples, lands, and belief systems make for a heady story filled with deeply drawn characters. Not only are the Golem and the Jinni creatures that differ greatly from the humans who surround them, but the theme extends to the immigrant experience of the time as well. There’s an intricate weaving that eventually links the seemingly disparate characters, and the path to the revelations their connections represent is winding and totally intriguing.

Unbelievably, this is a debut novel from Helene Wecker, who writes with a command of pacing and expert storytelling. Though I’m not a fantasy reader, per se, I loved the combination of these characters and the various forms of mysticism, religious, and ancient beliefs in a setting that is always a literary treat- turn of the century New York City. As my friend enthusiastically raved to me, I do so, as well– read this novel!

We’re happy to be participating in the TLC Book Tour for The Golem and the Jinni. Check out the other stops on the tour to hear other book bloggers’ opinions of the book.

« I Am Walt Disney
While We Were Watching #Downton Abbey #Giveaway »