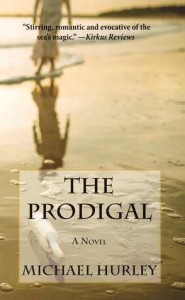 I’ve never been an ocean person. I imagine those words might send some folks into shock, for I’ve known plenty of people who feel an almost magical connection to the sea, who never feel more comfortable than sitting on the beach with the waves lapping at their feet. Even if I don’t share the same personal affinity, I can still recognize that magical quality that the sea often imbues in literature. Michael Hurley’s novel The Prodigal includes the sea as both the backdrop to the multiple story lines in the book, as well as a character in and of itself.

The prologue of this novel pulls readers back in time to Greece in the mid-nineteenth century. A young Gypsy woman has decided to run off with her lover, with her father in fast pursuit. They steal The Prodigal, a ship that sails faster than is even believable. After this brief introduction to an event that will surely become relevant later in the story, readers are then brought back to present day, but a seaside setting remains. Ocracoke Island, North Carolina, becomes the background to several distinct characters through the course of the novel, though it takes almost a third of the novel until their stories become intertwined or their connections begin to be revealed. A former big city lawyer, a Catholic priest, a towboat operator, and an illegal resident all become fleshed out in great detail, and though they seem to all have very different back stories, it’s easy to see parallels and common ground among them all. When a mysterious ship enters their lives, bigger questions about history, faith, and established tenets of a Christian belief system begin to arise. One hundred and fifty years after The Prodigal set sail with the young lovers on board, could it be back to transform the lives of others?

There’s a sense of mysticism to this book that sits interestingly alongside a general sense of spirituality and the more strict Catholic dogma, with the magic of the sea also in play. Though it took a while to pull several stories together into one main narrative, once the story took off, I was definitely engrossed and cared about the characters. There is a gentle flow to the writing, which is a particularly fitting way to describe it, considering the role that the sea plays to every character’s development. This a novel that has more going on under the surface than might at first be apparent.

We’re happy to be participating in the TLC Book Tour for The Prodigal. Check out the other stops on the tour to hear other book bloggers’ opinions of the book.

« What’s on My Nightstand, October 22
Under the Wire: Marie Colvin’s Final Assignment #Giveaway »