My 15-year-old daughter and I never remember the names of the Harry Potter books. “The blue one! I’ll say. Number 5, I think,” I’ll flounder. “Oh yes, The Order of the Phoenix,” she’ll remember as the association of the cover brings her some clarity. Regardless of if I can remember the titles or the plot or the order, I too can picture the books in my mind. I can see the covers with the harlequin diamonds on the spine and the cover art of Mary GrandPre.

Scholastic has released a new series of paperbacks featuring new cover art from Kazu Kibuishi. Harry Potter and the Sorcerer’s Stone (Book 1) came out on August 27. The entire series is available as a boxed set or as individual paperback copies.

I like what’s familiar. I always think, “Why change? If it ain’t broke, don’t fix it.” 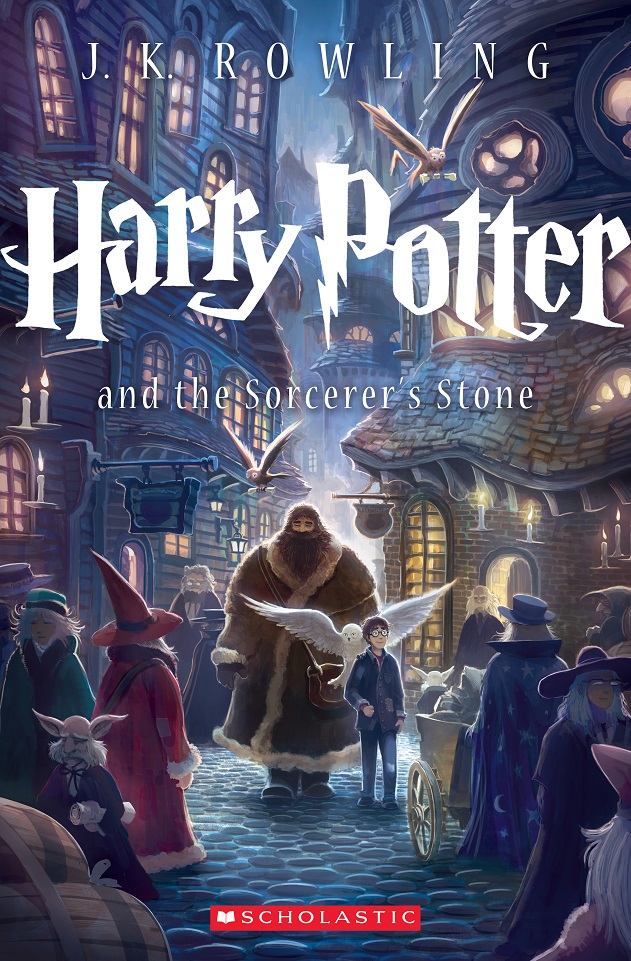 These are released in honor of the 15th anniversary of the series. Fifteen years. The 9 to 12 year olds who started reading the books when they first came out could now be raising children of their own. Scary.

I requested the new version from Scholastic as a curiosity, and also because I had thought it might be cool for my 9-year-old son to have his own book, as he’s been asking to start the series.

I was glad to see that the very distinctive type used in the Harry Potter books hadn’t changed. Also, the work of Mary GrandPre is still there, in those little chapter heading illustrations.

I have to wonder, are these the covers that my son’s generation will remember? Will they endure? Or will it take perhaps 5 or 10 more years before the hand-me-downs from big brothers and sisters become less prevalent?

Kyle read the first book (again, it’s how I think of them, book one, still not using the titles or even the more appropriate “year one” designation). He liked it. I’m trying to keep him from plowing through them too quickly, hoping he’ll allow the story to unfold, and definitely wanting him to wait a couple years before he gets to the more intense later scenes, but for now Harry Potter and the Sorcerer’s Stone is a book that he read and enjoyed this summer, and regardless of what the book covers he grabs look like, I know he’ll continue on.

Although the “old” covers are familiar and beloved to me, I do think that the makeover will be good for the series, for helping that it feels current to these kids. What do you think?

Check out my On Reading post about other new classics for kids, where of course I’ve included Harry Potter. I’d love to know what your thoughts are on some of the others.

« Kind of Cruel
What are the new children’s classics? {On Reading} »