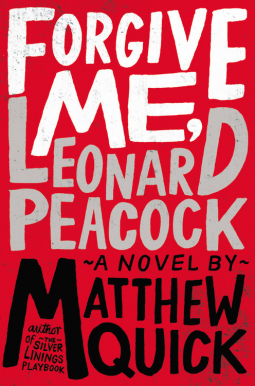 Hello Holden Caulfield! Okay, Leonard Peacock isn’t exactly looking for the Catcher in the Rye, but Leonard reminded me of that precocious, skeptical, confused, irreverent character in that well-known novel. I’ve been hearing nothing but good news about this one as well.

Today is Leonard Peacock’s birthday. It is also the day he hides a gun in his backpack. Because today is the day he will kill his former best friend, and then himself, with his grandfather’s P-38 pistol.

But first he must say good-bye to the four people who matter most to him: his Humphrey Bogart–obsessed next-door neighbor, Walt; his classmate Baback, a violin virtuoso; Lauren, the Christian homeschooler he has a crush on; and Herr Silverman, who teaches the high school’s class on the Holocaust. Speaking to each in turn, Leonard slowly reveals his secrets as the hours tick by and the moment of truth approaches.

Light and fluffy, right? No, it’s not. It’s harrowing and tragic, but oh-so-real.

The story is told in the context of this one day, but there are also flashbacks that help the reader understand the whys — why he feels the way he feels, why he hates his former best friend, why he loves and respects those whom he’s giving the gifts.

I felt like I really understood Leonard Peacock, and more so, I felt like this book helped me understand some of what teens are going through now. This was not an easy topic, but it was an easy read — I flew through this book.

As I said, this is a tough read. There’s some strong language and some mature subjects, in addition to the suicide that is the basis of the novel. So for me, this is a novel for adults and young adults, and perhaps for an older high school student.