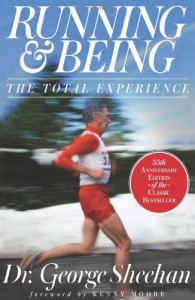 If you want to become a runner, don’t start running. Start reading.

Too many people never become runners because they start out by listening to well-meaning people who tell them about training and hill work, heart-rate monitors and fartleks, and the worst running term of all:  miles.

To sedentary people, a mile is pretty much the distance to the moon and back: an unfathomable, terrifying expanse they could never cover on foot, unless they were on skates, being pulled by a team of sled dogs.

Running your first mile is daunting. Heck, for some people, so is running to the mailbox. And the sport of running is as much mental as it is physical, so please don’t try to become a runner by going outside and trying to run a mile, or ten.

First, curl up with some good books. (You can make it as far as the sofa, yes?)

Beginning a running program by reading about running is the best way is the way to infuse your brain and soul with the desire to run.

Without desire, you won’t get past your doormat.

With desire, you can run to the moon.

When I first started running 25 years ago, the book that got me out the door was Running and Being by Dr. George Sheehan. Sheehan was a cardiologist who started running in mid-life and then began writing about the existential aspects of the sport. As a columnist for Runner’s World magazine and in eight books, Sheehan came to be known as the foremost philosopher of running. He didn’t write so much about how to move one foot, and then another, to propel oneself down a road, but about the struggle, pain and euphoria of living … which just happens to correspond with the struggle, pain and euphoria of running.

Even now, 20 years after his death from prostate cancer, I can’t pick up one of Sheehan’s books and read a few pages without wanting to lace up my shoes and go for a run.

Sheehan began writing during the first “running boom,” the period in the 1970s in which the sport became mainstream, at least for skinny people, who took to the road in great numbers, wearing shorts and those ridiculous terrycloth headbands.

In the second running boom, which began 10 years ago, more people my size started running, and the number of books about running, likewise, increased. There will always be manuals on the “how-to” of the sport, descendants of Jim Fixx’s 1977 classic, “The Complete Book of Running.”

But the ones that keep us running are the “why-to” running books—  authors who, like Sheehan, go beyond the mechanics of footstrike and breathing and aerobic thresholds, and talk about what motivates the human being to run at all, whether one mile or 26.2, seeing as we no longer have to capture our supper.

Books like these will do as much for your athletic progress as the actual training you do. You don’t need to read a book to learn how to run; any neurologically typical 2-year-old can do that. But a good running book will make you want to run. Your shadow may still look like a walrus, but your spirit will bound like a gazelle. And where the spirit goes, the body is sure to follow.

Here are the books I recommend for new runners, or anyone thinking about giving running a try:

Join in! Leave a comment and let us know if any of these books have inspired you, or if there are others that have.

Jennifer Graham, the author of   Honey, Do You Need a Ride? Confessions of a Fat Runner (linked to the review and giveaway up tomorrow),  has been running for 25 years without injury, arrest or involuntary committal. Her websites are http://www.jennifergraham.com and http://www.endierunners.com.

« Like Bug Juice on a Burger
Honey Do You Need a Ride? Confessions of a Fat Runner »