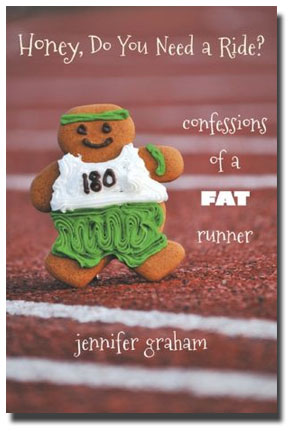 Honey, Do You Need a Ride? Confessions of a Fat Runner is the story of Jennifer Graham’s 25-year pursuit of running. I accepted the book for review because I had hoped it would live up to the PR pitch:

Like any memoir worth its salt, it’s about more than it appears to be. Yes, it’s about running, but it’s also about a woman dealing with a tough divorce and finding herself suddenly a single mom.

I would say that Confessions of a Fat Runner is definitely a memoir worth its salt. The things that exceeded my expectations were numerous:

Can we talk about the f-word? It makes me uncomfortable too. As you can see from the picture in her guest post Books to Make You a Runner, she’s not obese. No, she’s not svelte, and her efforts to lose weight are not simply an exercise in vanity, but “fat”? Graham has struggled with her weight her whole life (another prominent theme of the book), and so she’s completely self-aware and a bit self-deprecating about the issue. She’s not really making herself the butt of her own jokes, nor is she at all looking down on others who struggle with their weight. I think she’s sort of owning it. And since a “fat runner” as compared to the typical long and lean type, is a broad spectrum (no pun intended, but feel free to laugh anyway), I came around to acceptance of the title.

Check out her guest post, on books that have inspired her as a runner.

I’ve just found out that I also have a giveaway copy to offer one of you (U.S. shipping only). I’m thrilled! Just leave a comment here if you are interested in winning your own copy of Honey, Do You Need a Ride? Confessions of a Fat Runner. If you leave a comment on her guest post, I’ll give you an additional entry. The giveaway is closed.