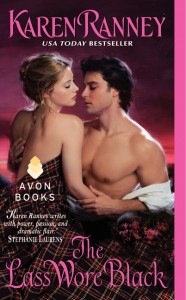 When Catriona Cameron suffers severe scarring after a carriage accident, she retreats to Edinburgh not to heal but to mourn the loss of her exquisite beauty and hide herself from the world in The Lass Wore Black. Her aunt by marriage begins to worry when she not only doesn’t leave her suite of rooms after months but insists on wearing a heavy veil and black dresses at all times. When her appetite suffers, Dina MacTavish calls in a physician to examine her by stealth since Catriona refuses to see another physician who will only tsk and tell her that it’s God’s will.

Dr. Mark Thorburn’s grandfather is an earl, and his father detests that he doesn’t simply sit around waiting for the title to pass to him but instead sullies himself by practicing medicine. Mark doesn’t just minister to the wealthy society matrons and their too often non-existent ills, but he also is a physician for the poorest of the poor in Old Town. When Dina MacTavish requests his help in getting Catriona to eat again and to examine her, he agrees.

Thus, the ruse of him posing as a footman begins. Catriona is struck by the man who refuses to bow to her or to pity her, and Mark is touched by the anger and sadness inside her, remembering the incomparable beauty he saw flit into her father’s office without even noticing someone else was there back in the day when her father was one of his mentors. As Mark starts to tear down some of her walls, Catriona begins to realize that there is a world outside the one she’s made, and she begins to take baby steps towards moving into it.

As you may know, I have a slightly guilty pleasure of romance novels. I’m not into the ones that are romance as defined by how many different ways can we describe the same act but the books that have characters who fall in love and fight through some sort of conflict to get together – be it solving a mystery, accomplishing a goal, or some other obstacle thrown in their path.

In this book, I started out detesting Catriona. She was so incredibly selfish and shallow and focused so intensely on herself that I didn’t want to be around her even reading the pages. I’ll admit that twenty or thirty pages in, I wasn’t sure that I’d want to even finish the book. Fortunately, the patience and wit and stubbornness of Mark brought a sparkle to the pages, as you could sense the thinly veiled (pun intended) frustration on both sides during their interactions. And yes, she grows and changes over the course of the book as she experiences various challenges and new experiences.

I appreciate that the book also shares interactions with Mark’s family, with the father who is disgusted by him and his housekeeper who mothers him. I liked being a part of Mark’s visits to patients in Old Town, having my eyes opened to some of the horrors that existed then that I am so sheltered from now. And of course, there is the requisite obstacle. Because – would you believe it – Catriona’s carriage accident wasn’t an accident at all. It was an attempt on her life, and it won’t be the last one….

So yeah, that bit was a bit contrived. And the maid Artis was definitely not my favorite character. But the book is a fun and light read, one of many set in Regency Scotland by Karen Ranney. This was the first book I’d read by her, and I’m definitely open to reading more. This particular book was not a part of any of her series, though the story of Catriona’s sister Jean is told in A Scandalous Scot. The book stands completely on its own, however, as all good books should.

Written by Michelle who is beyond grateful that she never had a tutor who tortured her by locking her in a closet when she could’t recall the capital of Greece. She has her own parenting theories that she puts to the test with her two wee ones. See what she’s up to on her blog Honest & Truly! or follow along with her on Twitter where she is also @HonestAndTruly.

« The Sunshine When She’s Gone
The Kite Runner, 10th Anniversary »