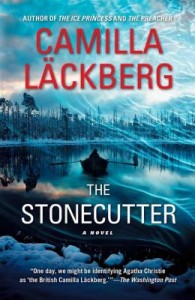 Camilla Läckberg has it, whatever “it” is. I stayed up until after 3am to finish her latest novel The Stonecutter the day I got it if that tells you anything. This is her third novel in the series focusing on police detective Patrik Hedstrom, and for the most part it stands on its own. I have not read the previous two books (The Ice Princess and The Preacher), but they are on my must-read list after finishing this installment.

In the opening of the book, a lobsterman is pulling up his traps when he discovers a girl’s body tangled in the line of one of his traps. When detectives Patrik Hedstrom and Martin Molin arrive at the scene, Patrik realizes that he knows the girl. It’s the seven year old daughter of a friend of his girlfriend, Erica Falk. And thus the nightmare begins of attempting to discover the identity of the murderer.

The book has two threads of a storyline, the murder investigation set in current times and that of a selfish, spoiled woman set in the 1920s. The second storyline contains short snippets of a page or three, alternating chapters with the primary story. It seemed wholly disconnected with the main plot for the first two-thirds of  the book, as intriguing and darkly fascinating as those snippets were, but it ties together beautifully with the main story by the end, creating so much more understanding and clarity as to how the murderer came to be.

The book is filled with many richly defined characters. There were so many names and people to keep track of, some of whom are not central to the plot of this book, such as Anna who is the sister of Erica (Patrik’s girlfriend and the mother of his child). Because they are so nuanced, even one or two paragraphs into a chapter starring them, it is easy to remember all you know about them. Some books have half as many characters, but they aren’t memorable, forcing you to flip back and forth between chapters to sort out who is who. It takes a lot of talent to draw such a vast array of characters and maintain their differentiations. The book also hints at some troubles that the police chief Mellberg had the summer prior with “Irina” though they are never detailed. These seemingly extraneous bits appear to be more of what ties the whole series together and would work better had I read the first two books prior to starting this one, but that is really the only way in which this book doesn’t stand on its own.

The underlying theme of this book is not just the murder investigation but motherhood. Erica is a struggling new mother, Charlotte has lost her daughter Sara and is trying to figure out how to parent her baby Albin in the aftermath, Monica worries about her adult son with Asperger’s and his father’s disregard for him, Asta is troubled by her husband’s insistence that they cut all ties with their son, and more. The challenges that all the mothers face and how they move forward with their lives to address them is an entrancing study in human psychology and the effects of parenting.

Every character in The Stonecutter is flawed, and more flaws are uncovered in each of them as the plot unfolds. Even Sara, the murdered seven year old, is no angel, lending an appealing humanity to her. Unlike a few other books I’ve read lately where the characters become unlikable with their myriad flaws and show no interest or awareness in their flaws, many of these characters attempt to address them throughout the book and grow, making the reader want to root for them.

While at heart The Stonecutter is a mystery, the book is so much more. It appeals to me as a reader on so many levels – and best of all, even though I thought I might know who the murderer was a little over halfway through the book (and I was right), the continued investigation and unraveling of the mystery kept me enthralled.

In the interest of full disclosure, I received a copy of “The Stonecutter” for review purposes. I was not otherwise compensated, and all opinions remain my own.

Written by Michelle who is thrilled to report that her library has copies of the other two Camilla Lackberg novels and is now about to read them. See what happens when she stays up all night to read a book and the follies that ensue afterwards on her blog Honest & Truly! or follow along on Twitter where she is also @HonestAndTruly.