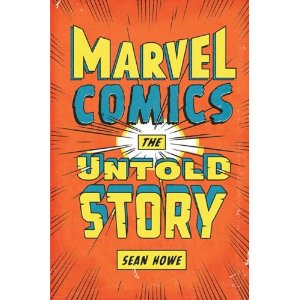 My first introduction to the world of Marvel Comics was in high school when various guys from my church youth group became super interested in the X-Men. I started to hear names like Wolverine and Siren and then those same guys began dividing the youth up into two teams. Each individual on each time was given a secret “code name” based on an X-Men character. I have conveniently forgotten who I was assigned to be. My next run-in with Marvel was when I watched Raimi’s Spider-Man back in 2002. You know. The one with the upside-down kiss. Beyond that, my experience with comics was with Marvel’s rival, DC Comics. My brother and his best friend used to watch re-runs of the old Batman show starring Adam West.

Still, despite my limited interactions with Marvel, when I saw Marvel Comics: The Untold Story

come through, I was curious enough to read it. After all, comics are fun, right? I like the idea of superheroes conquering evil villains and I can stretch the limits of my imagination far enough to enjoy a good story which involves some unbelievably flashy costumes. I can enjoy that very much. But it will be harder to do so now.

Unfortunately, reading the history of Marvel Comics, from its conception by Martin Goodwin as Timely Publications in 1939 to its present state, made me greatly distrust comics when it comes to telling a good story. The fact is, they don’t try to tell a good story. They just like to make money. (I realize that most publishers like to make money. But I harbor the thought that authors like to take a little time to write a good story that is worthy of publication.) In the case of Marvel, they were spinning out as many publications as they could on tight deadlines at the expense of quality.

Stan Lee, the former writer, editor, president and chairman (all at different times) of Marvel Comics was quoted as saying to a film director, “I can’t understand people who read comics! I wouldn’t read them if I had the time and wasn’t in the business.” (page 103) The editors would over assign stories so there was a backlog of tales which could be stored and used as back up if someone was “late or drunk and lied about it.” (page 26) Deadlines were constantly looming over the writer’s heads and they didn’t always have time to sit and think through their story lines and so produced what were sometimes admittedly fairly sloppy work product. But the idea behind producing comics wasn’t to create quality work – it was to give the masses what they wanted and to take their money.

Furthermore, the office environment of Marvel Comics was not one to be admired. The writers worked for hire, which meant that they did not own the rights to any of their creations. They created Spiderman, The Fantastic Four, etc, for the sake of the company who held all of the copyrights. Back in the ’40’s and ’50’s this wasn’t so much of an issue but once the idea of the Almighty Copyright took root, the individual writers at Marvel began to feel disgruntled that they weren’t profiting from their own ideas and designs. Writers were used by Marvel to write, not to share custody of characters with. The feeling that Marvel owed their employees is not a foreign concept to us nowadays but it was a change in the industry which created an atmosphere of jealousy, anger, and bitterness. The office, which was (and is) based in New York was loud, busy and hectic. The walls of the office were described by Sean Howe as being covered in posters of pin-up girls. There were few women physically present in the office, but Howe paints a picture of an office full of men who liked sex, drugs and alcohol. Logically then, all of those things had great influence in the writing of the comic books. The writers fought, bickered, yelled, and were very tense working in a high stress environment. Howe relates stories of a few employees who died young from heart attacks after working at Marvel. The job was just so stressful.

Truly, all of the above doesn’t sound very pleasant to me. Because the office environment of Marvel felt so tense, so did the reading of its history. I can’t really say that I enjoyed this book because it was so full of examples of anger and resentment. Yes, Marvel and its writers created quite a comic empire and yes, they have become quite popular and successful. But all of this came about at the expense of so much happiness, and resulted in products that Stan Lee himself didn’t quite understand. Yet people have loved and enjoyed these marvelous characters such as Captain America, Spiderman, Dr. Strange (who is very strange) and all of the rest. Reading Marvel Comics: The Untold Story

has definitely tainted my opinion of these comics. So much so that I wouldn’t take the time to read a history of DC Comics so that I can like Batman ignorantly if need be! I would have liked this particular history much more if Howe had stuck to facts of how the company was built up, but I suppose you cannot do that unless you discuss the writers and the people behind it. I think I would have rather just not gotten to know them.

Due to the fact that I know many people enthusiastically love and adore Marvel Comics, I know that what I’m saying here might not be received very happily. (Apparently Marvel writers lived in constant fear of their readers becoming upset by story lines. The writers occassionally received death threats when they killed off a beloved character or took an unpopular road with a series.) If what I’ve said bugs you, then understand that all of the above is stated from the perspective of someone who hasn’t read a single comic book (and now likely won’t). I do have plans to watch the Captain America movie. (My brother and his wife love it!) But to dive any deeper into the world of Marvel is going to require me to forget its history – which is not something I’m typically inclined to say.

Thanks to HarperCollins for sending a copy of this book my way in exchange for my honest opinion.

Carrie writes about book (normally not the comic type) regularly over at Reading to Know.

« You Don’t Know Me
Creepy Carrots! »