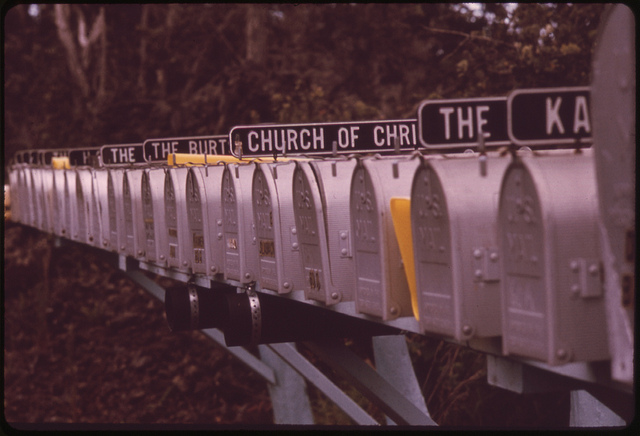 It’s been quite a while since we participated in Mailbox Monday. We were regular participants two summers ago when we first found it, and did it for quite a while, but it became cumbersome to keep up with and manage as a team. With several of us writing (and reading!) here, we ended up with quite a long list each week.

Back when we were a part of the group, Marcia was looking to set up a touring schedule for hosts, and I (Jennifer) signed up. Last week I got a reminder that we were scheduled to host in August, and I remembered what I liked so much about that weekly linkup. Like our own monthly What’s on Your Nightstand , it’s just a very cool chance to connect with booklovers over our beloved fascination/hobby/addiction.

If you’ve never participated in Mailbox Monday, I invite you to link up. July is hosted at Mrs. Q Book Addict, so you can even start today! We are hosting for the month of August (and if you regular participants are wondering, our post will be live at 9:00pm Eastern each Sunday in August, since it seems like that’s when most people like to link up). We hope to see you here!

What is it all about? It’s a way to share the books that have come into your house that week via your mailbox, or the brown truck, or a bookstore trip or even via a WIFI click on your ereader.

We’ve decided that we are going to take turns sharing which books we received individually, but this week, each of us is going to share one book that came this week:

“India Butler, single and about to turn forty, travels to LA in an attempt to reinvent her life. In a world rarely illuminated by the flashbulbs of the paparazzi, she discovers the true meaning of having it all.” Thus reads the blurb on the back cover of the fun summer read that arrived earlier this week for review – India’s Summer

by Thérèse. I love the cover and am looking forward to relaxing with this book one of these summer weekends.

Upon Jennifer’s advice, I recently picked up Lissa Evans’ Horten’s Miraculous Mechanisms (linked to her review with OPEN GIVEAWAY!) from the library. I devoured this delightful piece of middle grade fiction in one sitting. How excited was I a few days later at the package on my doorstep that contained my very own copy of the first book of this series, but also an ARC of number two, Horten’s Incredible Illusions: Magic, Mystery, and Another Very Strange Adventure! This is scheduled for an early September release, so I’ll probably wait a couple weeks to tear through it, but I’m enjoying the anticipation of spending another few hours with these fun and adventurous young characters.

I enjoy a good cerebral murder mystery and I just got one that looks fascinating and is garnering high reviews. The Other Woman’s House

by Sophie Hannah opens with a woman looking on a real estate web site at a particular house. As she clicks through the photos, she sees a murdered woman’s body lying on the floor. When she comes back with her husband to show him the photo, the body is gone. Is she going insane? Despite her husband’s advice, she telephones the police. I’ve read another of Hannah’s books so I’ve already “met” these two detectives, and this book is part of a series although it also stands alone.

Yes. I know the rules. In polite society we do not talk about religion or politics. Or, at least, you don’t talk about them unless you want to risk potentially starting a debate. And if you aren’t ready to have that debate or discuss the issues, you’d probably better stick with the weather or sharing your great aunt’s world famous chocolate cake recipe. I confess I’m not one to dwell on the weather too much. I was attracted to Tea Party Culture War

(which does not discuss the Tea Party, so far as I can tell) because it takes a look at world views and belief systems and I think you ought to know what beliefs are out there to better understand where we’ve been as a nation (and as individuals) and where it is we’re going. I’m curious to see how this book will handle the discussion of differences but I’m looking forward to the challenge of the read! (Why? Because I just can’t help myself sometimes. . .) 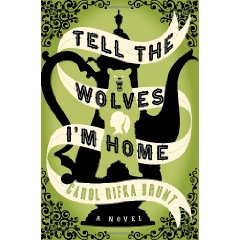 Tell the Wolves I’m Home has actually been out for over a month, but I just recently ordered it as an amazon Vine selection. I was drawn to the coming of age type story of friendship — an adult novel that will also be cross-promoted in the YA audience. From the publisher: In this striking literary debut, Carol Rifka Brunt unfolds a moving story of love, grief, and renewal as two lonely people become the unlikeliest of friends and find that sometimes you don’t know you’ve lost someone until you’ve found them. An emotionally charged coming-of-age novel, Tell the Wolves I’m Home is a tender story of love lost and found, an unforgettable portrait of the way compassion can make us whole again.

Thanks to our relationship with Macmillan Audio, I often receive unsolicited audio books that seem to appear on my porch just when I’m running low on audio material. Beth Harbison’s newest novel, When In Doubt, Add Butter is about a private chef who has six steady clients, when her life “takes an unexpected turn on a road she always thought was straight and narrow.” I love books that revolve around food and I’m looking forward to listening to this one.

« On Reading: How Quickly Things Change
What I Did »