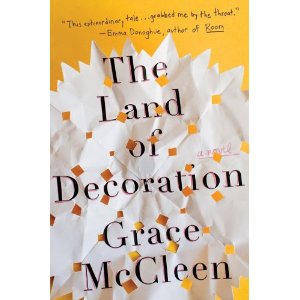 The Land of Decoration is Grace McCleen’s first novel. She tells the story of an immensely creative 10-year-old girl, Judith McPherson.

Since I believe in God with a Christian faith, I wasn’t sure how I would like the portrayal of Judith, who is described in the publisher’s description as “a young believer who sees the world with the clear Eyes of Faith.” Her belief is compared with her imagination, but the “power of faith” is also trumpeted in the press materials. I absolutely believe first-hand in the power of belief, but it is my Savior who performs miracles within me, not my own will or imagination. So, I knew that would be a sticking point in my possible enjoyment of the novel.

The book is told from Judith’s perspective, giving rise to comparisons to the extraordinary novel Room (linked to my review). The stories are totally different, but the power of using a narrator who believes and interprets things differently, and perhaps only knows part of the story has the same effect, and it’s powerful.

Judith and her father’s religion is portrayed as a conservative legalistic belief (and though it’s not named, I do believe that it’s more of a religious sect than true Christianity). That said, people who are not of the Christian faith probably lump them all together. Their faith is shown to be real, in my opinion, and is not mocked in the telling of the story, which was important to me.

That said, there is a character of God who speaks to Judith, and it’s here that the Believer would have to interpret this storyline. Is Judith crazy? Or has God really chosen her to act out on His behalf? I’m not sure that the intent is completely clear, but if I hold true to what my faith teaches me, I know what side I come down on. There are also things that this “God” says that are truly blasphemous.

This is where the child’s POV does it’s work. We only know what Judith truly believes. She tells us that her father doesn’t love her (But as readers we know that he is distant because of the death of her mother). I also found myself questioning the others in her life, I suppose as Judith herself did. For example, there is a teacher who continually reaches out to her, and yet Judith does not respond to her at all, which led me to believe that her motives might not be all good, when in reality, I think that it was Judith’s skepticism and mistrust of people outside her own faith that was coming through — brilliant.

It’s definitely an original story with incredible storytelling. It’s also a pretty sad and intense book. That is part of the beauty in creating a novel — giving me something to think and feel — but in this instance, mostly due to the warped concept of God put out there, I’m left sitting on the fence.