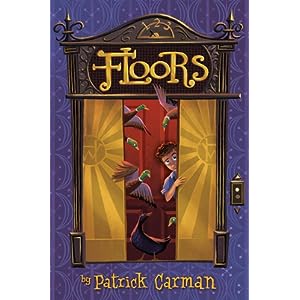 The Whippet Hotel. Filling one entire square block in New York City and owned by the eccentric Merganzer D. Whippet, the Whippet can definitely hold the title of the oddest hotel around. It is known to have nine floors, but there is much that is unknown about the Whippet, though there are rumors of secret passageways, hidden rooms, maybe even additional floors.

Patrick Carman opens up his new middle grade novel Floors with a tiny shred of background on Merganzer D. Whippet, and then starts the story with Mr. Whippet having been gone from his hotel for several months. In his surprising absence, the hotel has been kept running by the manager, the appropriately named Ms. Sparks, who is explosive and to be avoided whenever possible. While she has been officially in charge, the real care of the hotel has fallen into the hands of the Fillmores, Clarence, the maintenance man, and his ten year old son Leo, his trusty and very capable assistant.

When Leo discovers an odd box waiting just for him on the 100th day since Mr. Whippet’s disappearance, an adventure begins, one that will take him farther into the mysteries of the Whippet Hotel than he could ever have imagined before. He can only hope that if he follows on the path of this adventure, his questions about Mr. Whippet will be answered. What he does find definitely goes beyond his wildest dreams, and is truly life-changing.

This fantastical story has the flavor of Charlie and the Chocolate Factory, and was reminiscent of one of my family’s favorite movies, Mr. Magorium’s Wonder Emporium, as well. From beginning to end, this entire story is highly imaginative and wildly entertaining. Unique characters abound in the Whippet Hotel, and readers will revel in their wackiness. I’m thrilled to see that Floors is just the beginning of a new series, and I greatly look forward to reading more of Leo’s adventures in coming books.

Dawn has learned to embrace the joy that is a middle grade while her son is at this target age. When she’s not reading or teaching preschool, she can be found blogging at my thoughts exactly.

« What’s the Big Idea? Workbooks, Review and Giveaway
The Power of Six »