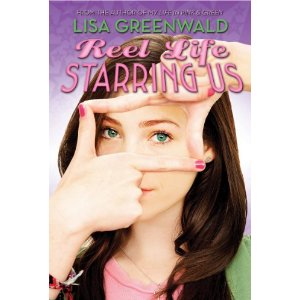 I remember when Lisa’s Greenwald’s book My Life in Pink and Green first came out. I saw lots of great blog reviews of it, and the awesome cover made it quite memorable. I never got around to reading it, but when I saw the new book Reel Life Starring Us on NetGalley, I jumped at the chance for my daughter Amanda (13) and I to read it.

Dina Gross has just moved from the Berkshires to Long Island. Her old school was kind of artsy. She was popular there, but her school didn’t shun those who weren’t in the popular crowd. Rockland Hills Middle School on the other hand, is all about what and who is in and out. Chelsea, Kendall and Molly are definitely the in-crowd, keeping up with the fashion trends and ruling the school. Because Chelsea is out the first month of school with mono, she gets paired up with “the new girl” for an important project for the school’s 50th anniversary. This “reel life” project is a video of the school, which causes them both to think about this school — Dina, with a new-girl’s perspective, and Chelsea as one who has lived in the community since birth.

The story progresses via alternating chapters from both girls points of view, and Greenwald distinguishes each girl with authentic and original voices. Yes, Chelsea is the richest and most popular girl in school, but things aren’t going so well at home, her friends aren’t always friendly and supportive of her, and she doesn’t think she likes the guy she’s “supposed” to like.

Dina is a delightful character. She’s unconventional and doesn’t seem to care what people think, so even being “chipped” multiple times her first month — a hazing ritual where crushed up chips are put in a student’s backpack — doesn’t faze her too much. But she is an adolescent girl, and so this honest portrayal does show her having the doubts and insecurities that are common to any 8th grade girl (including Chelsea, who is supposed to have the perfect life).

Up close he smells like he used too much cologne or too much of that men’s body spray.

Specific details, such as talk about current fashion like skinny jeans and metallic shoes, will make this story really resonate with its target audience. What person who has ever been around an 8th grade boy would disagree with the excessive use of Axe, as Dina noticed above.

Another scene that showed the self-deprecating self-aware thoughts of these girls might have missed the mark on being current, but I loved Chelsea’s observation:

When I get home from school, my parents are sitting in the den, talking. . . .There have been many times in my life when I felt like I was living in some sort of alternate after-school-special kind of universe, but I’ve never felt that way more than I’m feeling it right now.

I actually asked Amanda if she got the “after-school special” reference, which seems to me firmly rooted in the 80’s, and she didn’t. So one minor miss there (which gave me a chuckle, and Amanda probably didn’t even catch it — plus we got to have a conversation about how when I came home from school, I didn’t have the choice to watch 300 channels, or what was on my DVR, and occasionally a story like “The Latchkey Kid” would come on and we’d watch it. But I digress. . . . ).

These girls are so real. The middle school situation is real. The parents are pretty real (though they aren’t really featured too much). That’s exactly what makes Reel Life Starring Us a satisfying read for middle school girls or those of us who remember or want to relive middle school.

Editorial note: Quotes are taken from an advanced reader’s copy of the book.

Jennifer Donovan didn’t hate middle school, and she’s enjoyed watching her daughter survive it as well. She blogs about her own real life at Snapshot.

« Next to Love
What’s the Big Idea? Workbooks, Review and Giveaway »