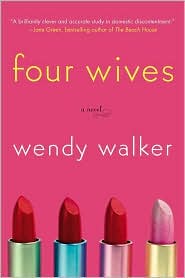 Four Wives is Wendy Walker’s first novel (she edited Chicken Soup for the Soul Power Moms, linked to my review). From the opening chapters, I was drawn into the lives of these four women. I related to some more than others, but they are all accurate pictures of what some women experience as wives and mothers.

Life complicates marriage and a woman’s self-esteem. That’s the truth. The problem with reading these types of novels is that we want the characters to be real, yet not so real that we lose the escapism of a good story because they remind us too much of our own less-than-storybook real lives. Wendy Walker does this well in Four Wives . These are women that could be your friends, your sisters. They support each other in the way that only women can — with childcare help, a listening ear, or a good vanilla latte.

This is a diverse cast of characters, all brought together as they serve on a committee for a women’s center fundraiser. Meet them.

Janie: “It was not a terrible life. Janie Kirk was a suburban housewife, the steadfast bottom of an inverse pyramid upon which the demands of her family balanced. It was a life founded at its core in her love for the children who lay sleeping inside” (page 2). She’s also impossibly beautiful (impossible because she’s surgically enhanced and spends more time than most of us have to spare at the gym). In spite of it all, she’s not happy, and she’s testing her wings of freedom in a way that she might live to regret.

Love: “Love couldn’t hold back a smile as she watched her baby’s eyes roll back in his head before closing. He was nothing short of blissful. . . . He was satisfied. And she was a complete failure. Setting into the state of defeat — a familiar place now — Love kissed Baby Will’s hand, then rested it on her chest” (page 8). Love still cares for her husband and her children, in spite of the fact that she completely feels as if she’s lost herself as she takes care of them and neglects herself.

Gayle: “She thought about the pills now, sorted carefully in brown prescription bottles in the bottom drawer of her vanity. . . .She was careful not to overdo — rehab would not be good for someone as visible as Gayle Haywood Beck. Two Xanax and a drink usually made it possible to be Troy’s wife” (page 12). Gayle is old money in the midst of the up-and-comers in the elite Connecticut suburb where they all live. But all of her money hasn’t bought happiness, and she’s begun to worry about the effect of her strained marriage on her young son.

Marie: “It was the [censored] suburbs. That was it. Life had been sailing along just fine in the city. A fierce litigator, Marie had been on the fast track in a New York law firm before having her first daughter, Suzanne. She’d had every intention of going back after her maternity leave, but the pull of her child had been too strong, and that had been that. . . . By the middle of her third year as a stay-at-home mommy, she had signed a lease for office space in town” (page 15 -16). Marie is the sole working woman of the bunch, and she does have a bit of a chip on her shoulder. She loves her family and has decided to protect her family from the destructive influence of the suburbs, while she herself is wrestling with decisions that could negatively affect her family’s well-being.

Find out more about this novel and Wendy Walker’s other works, including the video trailer, and Wendy’s own take on each of the four characters at her website. I’ve looked at a lot of author websites, and I love Wendy Walker’s author site because it actually has interesting bonus information.

Managing Editor Jennifer Donovan lives in Connecticut, just like the characters of this novel. She blogs about her life there at Snapshot.