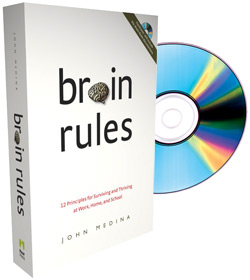 I didn’t expect to like this book at all. I expected any book written by a developmental molecular biologist would be a bit dry. I was pre-judging my enjoyment levels unfairly. As it turns out, I found this book not only fascinating, but fun!

Written by John Medina, Brain Rules addresses the topic of how to improve you basic brain function. Now, as a mother of a 21 month old, I found this possibility intriguing. I need a brain boost (beyond what Jamba Juice can offer)! He offered 12 “rules” on how you could do this, the most basic being through exercise and sleep. The most fascinating chapter was, for me, the chapter on sleep in which he talked about the circadian arousal system (which keeps you awake!) and the homeostatic sleep drive (which knocks you out!). Yeah. Sounds a bit heady, doesn’t it? Don’t let my paragraph fool you. He refers to both as the C and S drives and states the problems surrounding sleep (or the lack thereof) in very basic terms that anyone can safely understand. Did you know that there is no good answer to the question: “How much sleep do people need?” Because everyone is created uniquely different, everyone has different sleep needs. The well-known “8 hour” answer is really bogus which I thought was interesting.

The most fascinating aspect of this entire book though is that Medina spends this entire work arguing against the 9-to-5 job and the public school system’s system of education. He argues that locking people into programs and time schedules that allow for little creativity and individual brain nourishment is unnatural, and suggests that we would good to re-evaluate our system of education and corporate world mindset. On this I agree with him.

Interestingly enough, a great many of his arguments for a change in the modern classroom (to smaller class sizes, individualized attention, home stability, etc.) argue the case for home schooling remarkably well. He doesn’t mean to do this, however, and his suggestions for solutions are more government oriented. However, he does make the point that the current system is lacking the ability to well-educate the child and that a move towards something more individualized is in order for optimum brain function. I found his insights as a brain specialist fascinating.

The problem with this book is that he approaches his opinions from an evolutionary mindset. According to him, we should be looking at our history from “millions of years ago” when the cave man was fighting against the saber tooth tiger and exploring his primitive world to see how the brain develops. His opinion is that more brain development occurs as a result of natural exploration and that we would do well to step outside of the modern box (or, if you will, cubicles) and rediscover the natural world. In so doing, our brain cells get the boost they need, essentially. He recommends that instead of board room meetings happening “behind closed doors” that the business world take a hike (pardon the pun) and breathe some fresh air. Treadmills in offices would boost productivity and reduce health care costs for most companies.

All of these are highly appealing arguments, are they not? And I have to agree with them. However, I don’t agree with his pre-supposition. Man did not evolve into the being he now is. He was created in the image of God. We have powerful minds that we should absolutely learn how to take advantage of. We should learn how to care for them and “feed” them in a manner that will cause ultimate brain health and function. Each of us, as a child of God and the crown of creation should desire to be our best for His glory. I’m all about this!

So for that reason – I find this book worthy of some attention. My best suggestion would be to read it as a married couple. I think you will find that it will promote some good, brainy conversation between you and your spouse. If you like books that promote thought and cause you to examine things from a slightly different angle than you might normally do, then this book is definitely for you. Be prepared for some crass language and examples. Certainly I don’t agree with his scientific reasoning being founded on Darwin. I flat out disagree with that. But I do think that he has some things worth saying that are worth hearing. And as he is something of an expert on brain function, he knows how to hold his audience. Parts of this book that I meant to skim I found myself reading in whole because his writing is so intriguing.

I’d say give it a whirl for something different that you might not normally find yourself reading. I like to hate books with untruths but I don’t hate this one, which is why I’m bending my “rules of recommendation” in this particular case to accommodate a witty conversationalist with interesting insights. I’m not saying you are sure to love it. I am saying you will think. And that, after all, is Medina’s entire purpose with Brain Rules.

« From the Editor: Info and Input
What’s on Your Nightstand? »