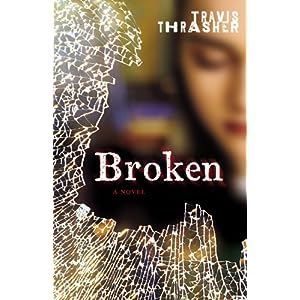 I was invited by Amy of My Friend Amy to participate in a Faith-n-Fiction Roundtable discussing Travis Thrasher’s novel Broken. Our discussion occured via email and the following is a portion of our conversation. Be sure to check the other participating blogs to read the rest of what we had to say about this supernatural thriller!

Amy: I’ve read Travis Thrasher’s two earlier thrillers and really enjoyed them, but I have to admit that I had a harder time following the plot with this one.

What did you think of the way we were thrust into the story? In some ways, I found it quite masterful that we were immediately sucked into the broken, fearful heart of Laila with no sense of history to guide us. We just knew immediately how much she had come to dread her life and the sense of terror that haunted her. But in other ways, it took some time for me to feel like I knew who these characters were.

Lisa: I, like Amy, had a difficult time both following the plot and finding it plausible. I know, I know–it’s a supernatural thriller and I’m looking for plausibility? I mean plausible in the sense that the events and the characters’ actions and reactions ring true to what we know about the characters. I felt detached from Laila at the beginning but once we began to understand more of her tragic history my sympathy for her grew.

Hannah: This was my first Travis Thrasher read. I agree, the timeline was kind of all over the place, and the reader wasn’t initially given many clues to help put things in order. This was a bit of a challenge at first, but I didn’t find this hurdle too big. I hadn’t thought of that, Amy (“immediately sucked into the broken, fearful heart of Laila”), but I agree, that was quite well done.

Yes, it did take a bit before I was invested in Laila’s life, but I actually enjoyed the chance to get to unpack these characters piece by piece and put the puzzle together on my own. Often we come into a book and ó bam! ó here’s a character, or a cast of characters, fully formed, sort of handed to us. I appreciate that Thrasher trusts his reader enough to let us peel back the layers on these fragile characters.

Jen: Sadly, I couldn’t bring myself to finish Broken. Like Lisa, I felt disconnected to Laila at the beginning. I found that without some sense of her history, I really didn’t care about her broken heart and, since I hadn’t been given anything to draw me into the story, the stylistic elements of ‘thriller’ felt very contrived to me. I found Broken just annoying me more and more, until I finally Pearl Rule’d it and gave it up at page 50.

Jennifer: When I first started Broken I was very confused by the change of characters point of views. I agree, the timeline felt all over the place. Especially with the journal entries. I immediately felt for Laila, I wanted to know more about her. I would read more from Thrasher because I did enjoy the novel but I felt like too many storylines were thrown at me.

Thomas: This was first time that I read a book by Travis Thrasher. When I first read Broken, I had enjoyed it with only a few minor issues bothering me. Over the last week as I thought about the book it seems that I have more issues about the story itself.

Did we pique your interest? For more of our book club discussion, click over to the following blogs…

Introduction: Amy at My Friend Amy

The Plot and Plot Devices: Hannah at WordLily

Role of Reviewers and Participants: Thomas My Random Thoughts

Thanks, Amy, for inviting me to be a part of the roundtable discussion group!

« Bringing Up Girls
On Reading: Going “Classic” with my Child »