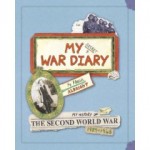 My Secret War Diary, by Flossie Albright: My History of the Second World War 1939-1945

is published by Candlewick Press, the same publisher of Spyology, which I previously reviewed. And just like Spyology

, this book is interactive and just plain fun.

This (secret) diary belongs to Flossie Albright and details her life in England during World War II. The diary covers six years of her life, from July 1939 until her soldier dad’s return from the war in August 1945. Flossie and her brother, Boo, live on an estate in the English countryside where their uncle is the head gardener. Flossie’s mother died when she was younger, making her concern for her dad’s safety all the greater (as if she wouldn’t have been concerned enough all ready). My one and only complaint, if you will, about this book is that it is written like a 9-14 year old girl would write, making continual use of the world “flipping” and “posh” which can grate on an adult’s nerves. However, that perceived weakness could also be one if it’s greatest strengths to young girls who are interested in history but need some motivation to learn about the past.

This book is written in diary form but Flossie includes pictures she has “pasted” in her diary from the battlefront. (For example, there is a picture of her dad in the trenches.) She includes clippings from the newspaper. She talks about what it’s like to go to school and participate in drills in case of air raids. She describes what it’s like to have to wear a gas mask and how many children cried when learning how to properly put one on and learn to breathe in one. She includes maps, drawings and correspondence between relatives during this dreadful time in our world’s history. In short, “Flossie” gives her best effort in information the reader of this “secret” diary of what life was like back then.

I think this book would have tremendous appeal to the majority of 12 year olds. This is an excellent resource to help kids learn without realizing that they are learning. Candlewick just does an awesome job at including interactive materials in their educational books from maps to fold out letters, to pictures and drawings. I’m really impressed with their products in this area (first with Spyology

and now with My Secret War Diary

). Although the language used in the book (“flipping” was the extent of any language issue I might take and the only reason I even noticed it was because it was repetitious) didn’t appeal to me as a thirty year old, I don’t think that would bother a younger reader and Flossie does come across as a modern girl stuck in an amazing period of history. On the whole I have to give this book a thumbs up for being creative and interactive. For my part, I think books like this really help to communicate the importance and relevance of our past and that makes this book worth some attention.