This particularl P.G. Wodehouse moment is brought to you by Overlook Press who have generously created the Everyman Wodehouse Series taking four of Wodehouse’s titles each spring and reintroducing them to us in a hardback, compact form. I love the Everyman Series and have been collecting these editions for some time. One of the latest releases in this series is Psmith, Journalist

Have you never read Wodehouse before? By gads, why ever not?! Obviously, you do not know what you are missing. To fill you in, Wodehouse was born with the English dry sense of humor in 1881. He was a banker (so was Psmith when he made his first appearance in the Wodehouse world) who worked in the London office of the Hong Kong and Shanghai Bank. He wasn’t destined to remain there though and found fame mostly through his work in The Saturday Evening Post. Although born in Surrey, Wodehouse eventually moved to America and became a citizen in 1955. During his time in American, he worked for The Saturday Evening Post and even wrote some song-lyrics and musicals. Wodehouse is more frequently and widely known these days for his Jeeves and Wooster series although there are a host of other characters which Wodehouse created that are worthy of a wee bit of a attention, none the least of which is Psmith.

, Psmith along with his “comrades” in arms take on New York City gangs. To know Psmith is to tolerate him and love him as you would a troublesome child. Psmith always means the best, produces the worst and somehow it always ends up alright for him in the end. Everyone in Psmith’s circle is the wiser, except for Psmith himself, of course, who looks upon the masses as a father would his own dear child. Psmith is full of himself but not intolerably so because you just want to believe he’s looking out for your best interests. Wodehouse describes Psmith, as well as New York, in such an artful form. Wodehouse has a way of describing not only his characters in a derogatory and yet loveable way, but also their surroundings. For example, his description of the New York subway system is as follows:

Conversation in the Subway is impossible. The ingenious gentleman who constructed it started with the object of making it noisy. Not ordinarily noisy, like a ton of coal falling on to a sheet of tin, but really noisy. So they fashioned the pillars of thin steel, and the sleepers of thin wood, and loosened all the nuts, and now a Subway train in motion suggests a prolonged dynamite explosion blended with the voice of some great cataract.” (page 93) 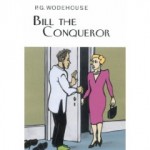 Another title in the Everyman Series is Bill the Conqueror

. This was a new character for me to make the acquaintance of and I have to say that Bill is one of Wodehouse’s true gentleman. He recognizes at the first part of the book that he’s a worthless young man, leeching off of his rich uncle and Bill decides that he needs to make his own way in the world. In a roundabout way his uncle helps to promote this spirit of determination and while on this journey of self discovery he meets a girl. (There is usually a girl, isn’t there?) In this case, the girl’s name is Flick and she also recognizes that she’s been leeching off of her rich relatives. The story gets a little complicated in the description but at 365 pages, I’d say this is one of the best Wodehouse stand-alone stories I have read. The characters are well-developed. The plot is both complex (in a Wodehouse way) and yet easy enough to follow. A true delight.

If you haven’t read Wodehouse, there are plenty of stories available to choose from. These are just two. If you love Wodehouse and want to keep your Wodehouse books around awhile (I know I do!) check out the Everyman series from Overlook Press.

Just whatever you do – give Wodehouse a try. It’s the best of good, clean fun.