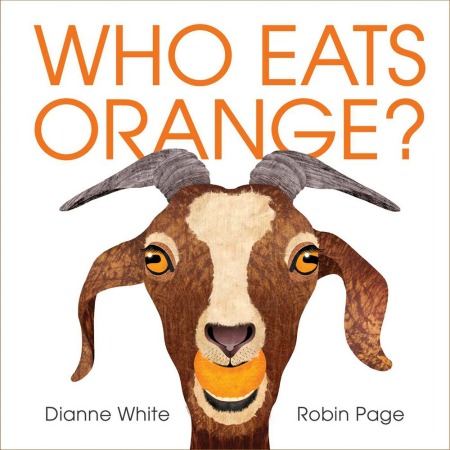 Not your traditional colors-themed picture book, Who Eats Orange? introduces a wide variety of animals grouped together by the colors of the foods they love to eat. Written by Dianne White and illustrated by Robin Page, it features boldly colorful and realistic images alongside short text that reads like a conversation.

The titular color starts readers off with a small orange and carrots included among the foods shown, as might be expected, along with a juicy slice of cantaloupe that is the object of a chicken’s pecking and a whole pumpkin getting chowed by a pig with a slight grin. After four animals eating the color orange are introduced, the transition to the next color is aided by a question about a fifth animal. As it turns out, that animal does not eat the color orange, and a new color becomes the focus as more animals take turns in spotlight, and so on.

The text doesn’t explicitly state everything that adults and young readers might discuss on each page based on the illustrations, such as the individual types of foods. Some animals’ habitats are mentioned, and some may be new concepts to young children, such as “the Pacific” or “the canopy.” Adults reading this book aloud can supplement the provided text with their own simple explanations. Some of the animals presented may also be new to children, for among the familiar farm and zoo animals such as goats, zebras, and giraffes, there are also animals from all over the world, including quetzals, yellow-bellied marmots, and grunts.

While you and your child may learn a thing or two from this picture book, don’t forget to take some time to truly appreciate the amazing illustrations. The animals all seem to be gazing directly at the reader, either from the side or with a straight-on stare, and the effect of the large images on a blank white background is quite captivating. The coloring and details give the appearance of texture and dimension, making these animals appear so lifelike as they enjoy their colorful meals.

Who Eats Orange? deserves a prominent position on library and home shelves for its visual appeal and interesting and unique take on a picture book of colors.

« Our House
Under a Dark Sky »