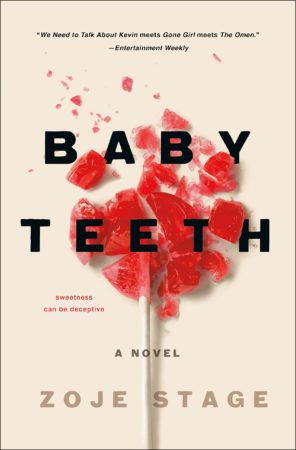 When we’re pitched advanced copies of books, it can be hard to know which ones will be hits and which will be overlooked. Baby Teeth was not one I expected to be promoted, based on the description, but after finishing it, I can see why it’s on so many Must Read lists for the month of July.

7-year-old Hanna loves her father. Her father loves her mother. And for this reason, Hanna vows to get rid of her mother, once and for all.

Baby Teeth opens with Hanna in a CT scan, Suzette hopeful but not optimistic that there’s a physical reason her daughter doesn’t speak. When the doctor suggests it’s not that Hanna can’t talk, but rather she won’t, Suzette agrees it’s time to seek help from a therapist. Her husband Alex has been in denial that there’s anything wrong with Hanna beyond not talking – he doesn’t see her outbursts at home, and he blames the schools she’s kicked out of for her behavior. But Suzette has reached the end of her rope, desperate for Hanna to not only get the help she needs, but also get her relationship with her husband back the way it was.

Baby Teeth is part horror, part family drama, and part cautionary tale. The reason for Hanna’s refusal to speak isn’t really made clear, other than she realizes early on the power it gives her over people. But her inability – or refusal – to communicate with her parents causes the chasm between Suzette and her to grow ever wider. And the more Alex sides with Suzette, the angrier Hanna gets.

The chapters alternate between Suzette and Hanna’s point of view, and as Hanna’s plans to get rid of her mother grow increasingly dangerous, the tension grows. The book has an open ending that leads me to wonder if there will be a sequel, and if so, I’ll be reading it.