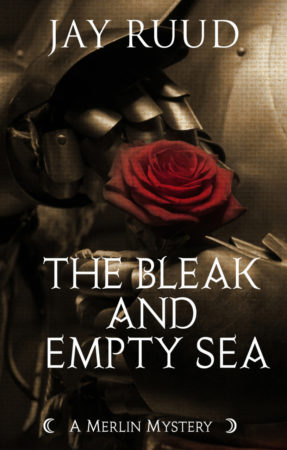 The story of Tristan and Isolde, two storm-tossed lovers who were both trapped in loveless marriages and only had passion for each other, is one that has inspired writers through the ages. But for the characters living at the time, something doesn’t add up. You might want to die of a broken heart, but in real life you just can’t, as the character of Merlin grumps to his assistant Gildas. And so, Queen Guinivere sends the two of them to France to investigate.

For those of you who don’t remember your Arthurian legends, a quick summary: Isolde is an Irish princess married to King Mark of Cornwall. Mark sends Tristan, his nephew and trusted knight, to bring her to him, but the two ingest a love potion and cannot resist each other. Tristan eventually leaves Isolde with her husband and goes to Brittany, where he marries another Isolde, called Isolde of the White Hands. Tristan is cut with a poisoned lance while out hunting with his knights and claims that only Isolde of Ireland can cure him. He sends a friend to bring her, and says to put white sails on the ship if she agrees to come, and black if she doesn’t. His wife Isolde lies and tells him the approaching ship has black sails, and Tristan dies of despair. When Isolde of Ireland enters the room and finds her lover dead, she too succumbs to despair and dies.

Something doesn’t add up for Merlin and Guinivere. Were they both poisoned? If so, how and by whom? Gildas and Merlin aren’t sure who to trust, as they scour the dusty medieval town of Brittany for clues. Their search leads them straight to Tristran’s close friend Kaherdin, who is not only lord of the city but also Tristan’s brother-in-law. Of course the duo interview the not-so-grieving widow, Isolde of the White Hands, as well Brangwen, Isolde of Ireland’s faithful lady-in-waiting who is always referred to as the Faithful Brangwen, which amused me and made me put some serious thought into how I could incorporate this sort of thing into my everyday life. They’ll face danger, as the person behind the killings want to keep things secret, and before long, one of their own companions is killed and another terribly wounded.

The Bleak and Empty Sea takes the idea of a modern murder mystery and offers a fresh look at old legends. It’s a fun idea, and an enjoyable read. It’s part of a series, but it’s the first one I’ve read and it wasn’t a problem to hop into the middle, as it were.